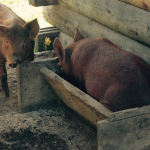 New York lawmakers and Governor Andrew Cuomo last year tapped their favorite slush funds for more than $500 million in pork barrel spending, according to the latest tally posted at our SeeThroughNY transparency database. And before the current session ends in two weeks, the Legislature could once again jack up its favorite pork appropriations.

Capital pork is now funneled primarily through a dozen programs administered by the Dormitory Authority of the State of New York (DASNY), whose backdoor bonding capacity serves as an enormous line of capital borrowing credit for the Legislature and the governor.

The largest program by far is the State and Municipal Facilities Program (SMFP), which was created in 2013 with an initial appropriation of $385 million and expanded in each budget through FY 2019 to give Cuomo and state lawmakers access to a total of nearly $2 billion. The Cuomo administration anticipates at least another $1.1 billion in SMFP spending through 2024, according to the FY 2020 Enacted Capital Program and Financial Plan.

A sixth consecutive annual addition to SMFP was noticeably missing from the budget bills adopted on April 1, raising the suspicion that a fresh infusion could be part of any supplemental capital projects bill enacted before session adjourns on June 19. Legislators alluded to the possibility of such a bill during budget bill debates in March.

The $508 million awarded last year, mostly from SMFP, went to 1,207 different projects. Few could be considered state-level priorities. Much of the money went for purely local amenities such as:

Other common projects included community centers, salt sheds and highway garages, and the purchase of ambulances, snow plows and other heavy equipment. Before the invention of SMFP, these sorts of expenditures were historically the responsibility of the local government—and local taxpayers.

The state’s threshold for SMFP “eligibility” does nothing to examine whether a project actually deserves public funding, and does little more than verify the entity’s existence and compliance with basic state laws and regulations.

The biggest single SMFP grant issued since 2018 was $23 million directed by Senate Republicans to the Metropolitan Transportation Authority for “creation of centralized train control” (for which no further explanation is offered in the DASNY list provided to us). Two grants totaling $25 million were steered by a pair of Republican state senators, John Flanagan and Kenneth Lavalle, to the State University of New York at Stony Brook for a “multi-disciplinary engineering building.” (These grants were accompanied by self-congratulatory, election-year press releases).

Still other grants are going toward non-profits, such as two snowmobile clubs, in Lewis County and Oswego County, that last year got a total of $150,000 for equipment, and a Utica-area outfit that got $1 million to build an “Irish Cultural Center.” Private, for-profit developers and firms also benefit: for example, Governor Cuomo steered yet another $3 million to the company building an outlet mall at St. George on Staten Island, and $770,000 to the operators of the Watkins Glen International racetrack in the Finger Lakes.

Pricetags naturally matter much less when someone else is picking up the tab, as the state is doing for a $10 million playground in Queens, and with $925,000 for pool and playground improvements in the rural Rensselaer County town of Hoosick. While the Legislature shovels state money to popular local projects, broader regional and statewide infrastructure concerns are still being neglected. For example, while Albany and other old upper Hudson cities have used DASNY grants to pay for (among other things) a skateboard park, their overburdened storm sewers continue to release untreated sewage into the river after heavy rainstorms.