In her State of the State address this week, Governor Hochul prominently called for a $10 billion “multi-year investment” in the state’s health care system, including $4 billion earmarked for wages and bonuses, with a goal of growing the industry’s workforce by 20 percent in just five years.

Exactly how this would work remains to be seen when Hochul releases her budget proposal later this month.

Given existing long-term trends in New York’s health-care industry, however, it’s far from clear that Hochul’s expansionist push is warranted, or that her proposed spending would significantly change things for the better.

Pandemic-related disruptions notwithstanding, New York’s health-care workforce has been growing at a robust pace – even as the state’s population remained virtually flat.

As of late last year, New York’s total health-care workforce numbered more than 1.2 million, or 62 per 1,000 residents, a ratio that was 28 percent higher than the national average, according to the U.S. Bureau of Labor Statistics (see chart). 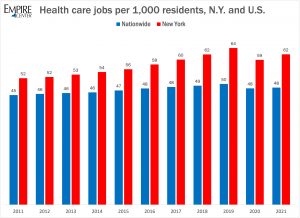 Over the past decade, that total jumped by more than 200,000, or 21 percent, without any particular push from Albany. Even after a dip during the pandemic, the health-care workforce of late 2021 was larger than it was in 2018.

The rates for different parts of the industry varied considerably. In the eight years leading up to the pandemic, hospital employment grew by 10 percent while nursing home payrolls shrank by 5 percent. The fastest-growing sector was home health care, which according to BLS figures has bounced back from the pandemic to its highest level ever – up 160,000 jobs or 131 percent from 2011 to 2021.

Another piece of context to consider is spending. Presumably, most of Hochul’s proposed “investment” would flow through the state’s Medicaid system for the low-income and disabled – which on a per capita basis is already the costliest of any state.

In that context, an increase of $10 billion over several years would be more or less routine. The program’s current budget of $84 billion in state, federal and local dollars is $9 billion larger than it was last year, and $19 billion higher than five years ago (see chart). 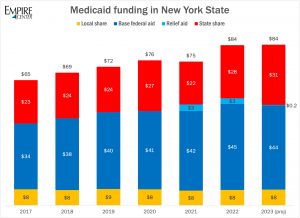 A large part of that additional money is already going to boost worker pay. After enacting the minimum wage hike of 2016, which increased the hourly rate from $9 to as much as $15, the state provided Medicaid funding to offset the cost of health-care providers.

Including federal matching aid, that funding will amount to $3.2 billion this year – and is projected to total $21 billion over the next five years. All of that presumably is flowing into the paychecks of health-care workers.

For providers that are heavily or exclusively dependent on Medicaid funding – such as nursing homes for the elderly and group homes for the disabled – there is an undeniable connection between their ability to recruit and retain personnel and the amount of money they receive from the state. Policy changes focused on those providers would be easier to justify.

There is a danger, however, that the lion’s share of Hochul’s proposal will be distributed to the health-care industry across the board, including providers such as hospitals that draw revenue from a range of sources other than Medicaid.

The final bit of context to remember is political.

During his 2002 campaign for re-election, then-Governor Pataki used Medicaid to boost the wages of health-care workers and secured an endorsement of their major labor union, 1199 SEIU, in return. During his 2018 re-election campaign, former Governor Cuomo ordered an increase in Medicaid funding for hospitals and nursing homes after receiving $1.1 million in campaign contributions from the Greater New York Hospital Association.

It’s not surprising that Hochul, in the context of her own campaign, would find a reason to boost funding for a politically powerful industry. Whether it makes sense for New York’s health-care system is a different question.