In the midst of the constitutional showdown over his pandemic policies, Governor Cuomo made changes to a disputed Brooklyn ‘cluster zone’ that seemed to contradict his own declared guidelines.

The changes rolled back limits on religious gatherings, schools and businesses even though coronavirus metrics remained above the official limits. This seeming attempt to finesse a lawsuit over religious freedom gives credence to the perception that Cuomo enforces his cluster-zone policy arbitrarily.

If the governor was trying to head off an adverse ruling by the Supreme Court, his strategy did not work: In a 5-4 ruling on Thanksgiving eve, the justices struck down the cluster-zone limits on religious gatherings as a violation of the First Amendment’s protection of freedom of worship.

The episode adds to the confusion surrounding the Cuomo administration’s pandemic management as the state heads into the holiday season with a sharply rising infection rate.

The cluster-zone strategy, first announced on Oct. 6, imposes special restrictions on limited areas with especially severe coronavirus outbreaks. The tightest rules apply to “red” zones – including a limit of 10 people at religious gatherings, which was challenged in federal court by the Roman Catholic Diocese of Brooklyn and Agudath Israel, an Orthodox Jewish organization.

According to the guidelines, zones move in and out of the various color levels based on a variety of data points, including most prominently the “positivity rate” – the percentage of tests that come back positive in a seven-day period.

However, Cuomo switched the zone to orange on Nov. 9, and to yellow on Nov. 18, even though its positivity rate – as reported at the governor’s daily briefings – never dropped below 3 percent (see chart). The governor said the zone “has continued to demonstrate progress” but did not explain why he was disregarding the positivity thresholds. 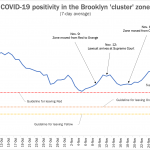 In the midst of those transitions, on Nov. 12, the religious groups’ appeal arrived at the Supreme Court. On Nov. 19, the state’s solicitor general, Barbara Underwood, notified the court in a letter that the disputed limits on worship had been eased – effectively granting the plaintiffs the relief they had sought.

Given that development, the dissenting justices – including Chief Justice John Roberts – argued that there was no longer a need for the court to intervene. The majority ruled otherwise, noting that the limits they considered unconstitutional might be reinstated at any time so long as the cluster policy remained in place.

With or without the restrictions on worship, it was unclear that the cluster zone policy was working. In the two months it has been in force, the state’s autumn wave has gotten markedly worse. New York’s infection rate remains low compared to the national average, but it has risen more sharply than any other state’s over the past two weeks.

Nor can it be said that the autumn wave is any longer contained to isolated clusters. The statewide positivity rate has risen past 4 percent, and at least 16 entire counties were above the cluster-zone thresholds as of late last month.

Although Cuomo is standing by his strategy, he has acknowledged the worsening trend – and promised additional, yet to be specified measures to monitor and mitigate pressure on hospitals. It remains to be seen if this new approach will be more effective, and more consistently enforced, than what has gone before.