Beyond providing direct aid, there’s another way the relief package being debated in Washington can and should boost New York’s bottom line: by loosening the federal reins on Medicaid.

Otherwise, the state’s short-term gain is likely to deepen its long-term pain.

As part of an earlier relief bill in March, Congress approved a temporary increase in federal Medicaid funding that’s worth about $3 billion to New York this year, some of which must be shared with New York City and county governments.

That help came with significant strings attached: States that accept the extra money are barred from tightening their Medicaid “eligibility standards, methodologies or procedures” until the pandemic is declared over and the temporary aid expires.

In effect, states must continue operating their Medicaid programs as they existed in January – which, in New York’s case, included plenty of waste and inefficiency and billions in spending overruns. As a result, many of the most important cost-cutting reforms recommended by Governor Cuomo’s Medicaid Redesign Team, and approved by the Legislature in the state budget, are now on hold.

The result through the first six months of the fiscal year can be seen in the chart below: State Medicaid spending was down by more than $2 billion – primarily reflecting the temporary federal aid received so far – even as total Medicaid spending rose by almost $1 billion. 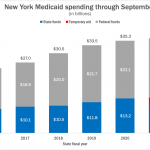 Also helping to temper Medicaid spending over those six months was a drop in general medical activity in March and April, when elective procedures were suspended, and the Cuomo administration’s withholding of certain payments to contractors. On the other hand, widespread job loss during the economic downturn has led to a sharp increase in Medicaid enrollment, which would be expected to increase the program’s expenses over the longer term. From March to October, enrollment is up 640,000 or 11 percent.

Temporary funding in a crisis is a two-edged sword. The more relief it provides in the short term, the bigger the budget hole it leaves when the crisis has passed, which is a lesson Cuomo learned when he took office in 2011. Much of the $10 billion budget gap he inherited was due to the end of temporary Medicaid funding Congress had allocated in the aftermath of the Great Recession.

One strategy for mitigating that headache would be for the state to cut spending where it’s needed least–in areas where Medicaid money is being wasted, abused or misspent. A prime example would be the non-medical “personal care” services provided to disabled recipients in their home, an area in which New York’s spending is both an extreme outlier and rising rapidly.

The Medicaid Redesign Team recommended modest reforms to control costs in that area, many of which are now on hold due the “maintenance of effort” rules imposed by Congress.

What those rules do not prevent is cutting Medicaid payments to providers across-the-board. This hits efficient and wasteful providers in equal measure, and is particularly hard on nursing homes and group homes for the disabled that are most heavily dependent on Medicaid funding to operate.

Cuomo protested the strings Washington put on its relief money when they first became law. A bill drafted and passed by House Democrats over the summer included a clause that would have allowed New York to move ahead with the cost-cutting fixes approved in April. That bill died in the Republican-led Senate.

Now that negotiations on a relief package have resumed, rolling back the maintenance-of-effort rules deserves to be on the table. Even those who oppose “bailing out” state and local officials should see the wisdom of untying their hands to manage their own affairs.

One way or another, New York will eventually have to balance its Medicaid budget–by at least slowing its growth to a sustainable level, if not trimming it closer to national norms. The only question is how the cost-cutting will be done, with the meat ax of across-the-board cuts or the scalpel of targeted reform.