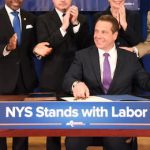 New rules championed by Cuomo in 2018 require employers to let unions “meet with” new hires—but employees, under those rules, don’t have to meet with a union representative if they don’t want to, and employers don’t have to make special accommodations.

Union presentations at orientation generally present the danger of employees facing coercion, since it forces anyone who might choose not to join to publicly decline to sign a membership card.

Cuomo is, in effect, setting up the unions to make new hires an offer they can’t refuse.

This orientation access would be an important get for public employee unions, which in 2018 lost their ability to force non-members to pay them thanks to the U.S. Supreme Court decision in Janus v. AFSCME.

The changes proposed by Cuomo in the FY2021 budget would affect all employees who bargain under the Taylor Law, the state’s public-sector collective bargaining law. Recent payroll data suggest there’s a sense of urgency behind the proposal: since Janus, more than 7 percent of the unionized employees in state government have either stopped paying dues—or decided not to pay them in the first place.

The Public Employee Federation, which represents state government’s largest bargaining unit (about 53,000 workers), saw its card-carrying membership drop by 28 people from November 2018 to November 2019—even as the number of employees it represents grew by 448 people due to hiring. That divergence indicates that on top of people quitting PEF, new employees are joining at a far lower rate than the employees they’re replacing. And this is happening even with Cuomo putting his thumb on the scale and engaging in tactics bordering on coercion to goose union membership.

Many employers, to be sure, already let unions present under terms set at the negotiating table—likely with management getting something in return. But Cuomo proposes to let every union have this, sparing them from having to give anything up in bargaining and reinforcing labor’s habit of running to the Legislature instead of using traditional bargaining.

To put this in context, legislation to ban smoking on state university campuses has been bottled up in Albany for years because of opposition from public employee unions such as the Civil Service Employees Association, the state’s largest municipal employee union, which argues such a move should only get done at the bargaining table and that doing it by statute would “delegitimize” employees as “stakeholders” in the bargaining process.

The unions have remarkably less concern about the sanctity of the bargaining process when they’re getting things from the Legislature instead of potentially having taxpayers get something back.