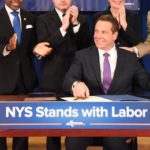 A few months before the U.S. Supreme Court’s June 2018 landmark decision in Janus vs. AFSCME, Governor Andrew Cuomo promised government unions the state would “do everything in its power” to “protect” them from potentially adverse consequences.

Flouting the clear intent of the court—and state law—Cuomo is keeping that promise.

Some, if not most, state agencies are giving blank union membership applications to new state employees as part of their new-hire paperwork, according to human resource representatives contacted by the Empire Center. To the extent this had become a habit when workers were paying the union regardless of whether they joined, it should have ended with Janus.

Public employees shall have the right to form, join and participate in, or to refrain from forming, joining, or participating in, any employee organization of their own choosing.

Handing a new employee a membership application along with his or her benefits paperwork is nothing short of an endorsement, if not coercion.

Given the inherently political nature of government unions—the court’s pivotal consideration in Janus—handing out their membership applications is about as bad as handing workers papers they can sign to divert a slice of their pay into Cuomo’s campaign account. It’s that inappropriate.

It gets worse: along with the membership applications, several agencies are giving material to newly hired employees indicating, falsely, that workers must pay the union regardless of whether they join—the 41-year practice that was ended last year by Janus.

The handbook for employees of the state Department of Labor tells workers on page 41 that union deductions are “mandatory”:

The “New Employee Guide” in use at several state agencies tells employees, on pages 20 and 21, that union membership isn’t “mandatory,” but that “union dues will automatically be deducted from your paychecks” even if they don’t complete a membership form. What’s worse, misleading wording indicates employees represented by CSEA won’t get state-funded benefits unless they join CSEA:

CSEA’s Employee Benefit Fund acts as a vendor for the public employers, including New York State, to provide dental and vision coverage for represented employees—not just members. Telling new employees that “CSEA benefits” will be off-limits unless they agree to pay dues is likely leading state workers to think they need to belong to CSEA to get coverage the taxpayers are funding regardless.

Other agencies, such as individual SUNY campuses, continue to describe union dues as “mandatory” deductions on their personnel or HR web pages, and inaccurate information is even being included in job listings. From one such posting by the state Department of Transportation:

“A payroll deduction will be taken from each bi-weekly paycheck whether or not the employee joins PEF (agency shop requirement).”

Part of this can be attributed to sloppy practices in a bureaucracy slow to adapt to new rules. But some of these publications have been updated during 2019, meaning administration officials chose to keep them as they are. And if Cuomo is to be taken at his word, state government will pull out all the stops to keep corralling new workers, and their dues, into public employee unions.

The fact that the bulk of those dues go to two unions that endorsed and supported Cuomo’s re-election is purely coincidental.

How NY will thwart Janus rights

The return of Hotel California