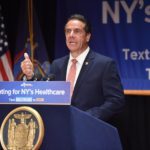 New enrollment numbers from the state-run health insurance exchange confirm a trend relevant to budget talks in Albany: Local governments are playing a smaller role than ever in signing people up for Medicaid.

The decline bolsters the case against a proposal in Governor Cuomo’s budget, which is premised on the idea that New York City and the 57 counties are primarily responsible for the program’s rapidly rising costs. In fact, their responsibility is limited and shrinking.

Until seven years ago, applications for the government-funded health plan flowed predominantly through the social service departments of New York City and the 57 counties.

Since 2013, however, the Cuomo administration has encouraged most recipients to register and reregister through the New York State of Health, the insurance exchange it established under the Affordable Care Act.

The exchange reported last week that its share of Medicaid enrollment through Feb. 7 had reached a new high of 3.4 million, up 3 percent over last year (see chart).

Meanwhile, total enrollment – including off-exchange sign-ups through local government – has been declining slightly, to just over 6 million as of July, the most recent state number available.

This means that the state-processed share of enrollment has risen to 56 percent, and local government’s share has dwindled to 44 percent or about 2.6 million.

This reminder of Albany’s increasingly dominant role in Medicaid comes at a time when Cuomo is trying to shift more financial responsibility onto localities.

In his budget address last month, the governor linked Medicaid’s current financial woes to a freeze on the counties’ share of funding for the program that was instituted in 2015. This created a “blank check syndrome” in the minds of local officials, he said: “We are signing the check, and they are filling out the amount.”

Under Cuomo’s budget proposal, local contributions would stay frozen only if counties (a) abide by the state’s 2 percent property tax cap and (b) hold Medicaid spending in their jurisdiction under the medical inflation rate, which is currently about 3 percent. County officials have said this change would cost them hundreds of millions of dollars.

As the latest enrollment numbers illustrate, however, the counties’ role in managing Medicaid is limited and getting smaller – giving them little leverage to control costs.

The county share of enrollment processing includes elderly and disabled people seeking coverage for long-term care, either in nursing facilities or at home – a category that has been growing rapidly in recent years.

However, the state sets the rules of the enrollment process. Under policies pushed through by the Cuomo administration, the state has taken over most medical screening and care management for long-term care recipients, mostly through contracts with private health companies. The state determines the package of benefits that Medicaid covers, and the rates it pays to hospitals, nursing homes, doctors and other providers.

It was also Cuomo and the Legislature who hiked the minimum wage in 2016, which has added billions of dollars to Medicaid expenses.

New York’s counties already chip in $7.6 billion a year for Medicaid, about 10 percent of its overall costs, which is more than in any other state. The burden is highest for low-income counties, which also have the least ability to pay. The long-term goal should be to reduce or eliminate the local contribution, not increase it.

The lion’s share of blame for New York’s Medicaid spending spiral lies at the state Capitol. Any further cost-shift to counties is a distraction at best and a money grab at worst.