Barely a year after Governor Cuomo declared the state was “broke” due to the pandemic, New York’s budget is bursting with cash—fueling enormous spending hikes, as shown in the financial plan update released today by Governor Cuomo’s Division of the Budget.

The top-line numbers, as grabbed from the Financial Plan’s summary chart: 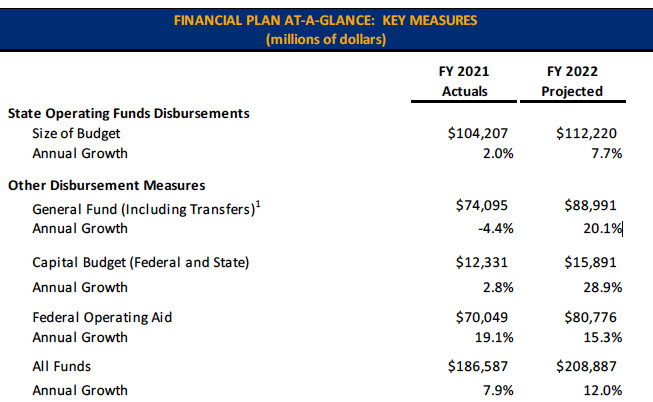 The FY 2022 All Funds spending total of $209 billion—up 12 percent—includes recurring federal aid to programs such as Medicaid, plus special temporary federal funding approved in a series of enormous state and local coronavirus relief packages passed by Congress starting in March 2020.

State Operating Funds (SOF) is, as always, the bellwether New York State budget category, because it represents recurring spending normally supported entirely by the state’s own taxes, fees, and other revenues. This was the accounting measure subject for most of the past decade to Cuomo’s self-imposed annual spending growth cap of 2 percent. The SOF budget will grow in FY 2022 by nearly 8 percent, rising from $104.2 billion to $112.2 billion. By FY 2025, it’s projected to hit nearly $125 billion.

The numbers underlying these totals are more funky and complex than usual. For example, the financial plan update says that $12.7 billion in unrestricted federal aid made available to the state government by the stimulus bill known as the American Rescue Plan (ARP) is “expected to be transferred to State Funds over multiple years to support eligible uses and spending.” Specifically, the budget apportions $4.5 billion in ARP money in FY 2022, $2.4 billion in FY 2023, $2.3 billion in FY 2024, and $3.6 billion in FY 2025.

That distinction matters—because, as noted, State Operating Funds have to be supported in the long run by the state’s own recurring revenues. Another $26 billion in categorical aid made available through several emergency federal coronavirus relief bills since last year is counted in the larger All Funds budget total as “pandemic assistance” alongside established, recurring federal aid categories in the All Funds spending total.

The plan assumes that higher SOF spending in FY 2022 also will be supported by $3.5 billion in projected added revenues from the budget’s tax hikes on New York’s highest-earning individual residents and corporations. The net revenue from those tax hikes is projected to grow by $4.3 billion in FY 2023.

In general, New York’s finances are so flush that—for the first time in memory—the state is projecting a balanced budget across two consecutive years, right through the 2022 election cycle. In the second half of the planning period, FYs 2024 and 2025, the projected budget gaps respectively come to $1.4 billion and $2 billion, minuscule amounts by historical standards. The federal ARP money clearly is a factor in these projections, while the numbers also highlight Cuomo’s assumption that the tax base won’t see a larger outflow of millionaire earners affected by a personal income tax rate that, for New York City residents, will now be the highest in the nation.

On the spending side, by far the most noteworthy trend is an enormous increase in state aid to the nation’s best-funded public schools. On a fiscal year basis, state support for public schools will rise from $26.9 billion in FY 2021 to $28.3 billion in FY 2022, an increase of 5.7 percent—not counting billions of additional federal aid flowing through several special categories. By FY 2025, school aid on a fiscal year basis will have risen by a total of $9 billion, or 33 percent, although enrollment is expected to continue a long-term decline.

On a school-year (July 1-June 30) basis, including aid that is customarily lagged from one state fiscal year to the next, districts will see a state aid increase of more than 11 percent next year. This figure does not include a whopping $13 billion of additional federal aid that will flow over the next several years. Inevitably, most of the additional cash will flow to teachers and administrators.