Today was the (rescheduled) deadline for filing 2020 federal income tax returns, which makes this New York’s third annual SALT-Free Income Tax Day. By midnight tonight, most Empire State residents will have been reminded once again that—despite what they’ve repeatedly been told by Governor Cuomo and other New York politicians—the 2017 federal Tax Cuts and Jobs Act (TCJA) did not raise their federal taxes.

On a most superficial level, it might seem obvious that the TCJA provision capping state and local tax (SALT) deductions at $10,000 would have to represent a tax increase for many middle-class residents of high-taxed states like New York, where property taxes on a downstate suburban house can approach or exceed the limit.

In reality, however, only a very small percentage of New Yorkers, mainly income millionaires, have been paying higher federal taxes due to the SALT cap. That’s because the TCJA also included various other provisions that reduced federal taxes in other ways, most notably the following:

1. Income tax rates were reduced. From a 2017 Tax Foundation report, here’s a table showing the income brackets and rates for married couples filing jointly, immediately before and after the new federal law took effect in 2018: 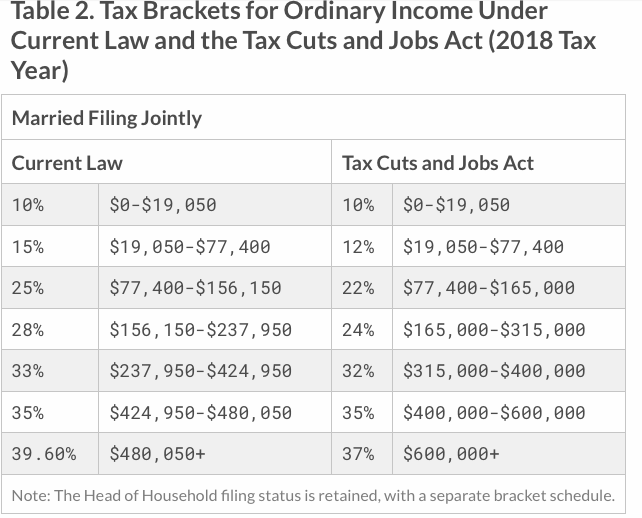 Unsurprisingly, the number of itemizers in New York’s federal income tax base shrank by nearly two thirds in 2018, from 3,427,800 to 1,211,470. The decrease was concentrated among middle class filers, with incomes ranging from $50,000 to $200,000; these households saved money and saw the chore of tax filing greatly simplified.

3. The child credit was increased—and eligibility for the credit greatly expanded. Specifically, the credit went from $1,000 to $2,000, and the income level at which the credit phases out went from $110,000 to $400,000 for married couples. For an income-eligible couple with three kids, the credit equates to a savings of $3,000—equivalent all by itself to the tax break previously associated with more than $10,000 in SALT deductions.

4. The alternative minimum tax (AMT) was significantly rolled back. The AMT dates back to the late 1960s, when it was created to ensure that a very small number of mega-rich taxpayers could not exploit various loopholes and tax shelters (long since closed) to avoid paying any taxes.  Over the ensuing decades, however, the AMT was never fully adjusted to keep pace with inflation and significant tax code reforms.

The complex AMT formula required a separate tax calculation that disallowed certain “preference items” including total SALT deductions and exemptions for dependent family members. As a result, in recent decades it had fallen mainly on the six-figure middle class of high-tax states like New York, while affecting only a small share of the highest-earning individuals.

As explained in this Tax Policy Center brief, the TCJA “significantly reduced” the AMT’s impact. According to IRS data, the share of New York taxpayers hit by the AMT fell sharply in 2018—from 5.9 percent of filers in 2017 to just 0.2 percent in 2018. In the $200,000 to $500,000 income bracket, the incidence of AMT filers fell from 81.6 percent to 1.7 percent; in the $500,000 to $1 million bracket, the drop was from 68 percent to 3.3 percent.  For these New Yorkers, even the capped SALT deduction represented an improvement over a previously allowed deduction of zero. (Among those benefiting from this change, according to his publicly disclosed tax filings, was Governor Cuomo himself.)

In 2018, the first year under the revamped and nearly SALT-free tax code, total federal income-tax payments by New Yorkers fell by nearly $3.4 billion, according to IRS statistics. The net 2 percent ­average reduction for Empire State residents was barely half the ­national average and among the smallest changes registered in any state—which is no surprise, for two reasons: (1) Empire State residents have higher average incomes, which are taxed at higher rates and qualified for smaller average percentage savings­ under the TCJA, and (2) the dampening effect of the SALT cap among very high earners.

Cuomo repeatedly has claimed that the SALT cap is costing New Yorkers up to $15 billion a year in higher federal taxes. This number apparently is an estimate of the amount New Yorkers would now be saving if the SALT deduction had been preserved in combination with all of the other tax cuts featured in the TCJA. As counterfactuals go, that approach is purest fantasy: the Republican-dominated Congress of 2017 would never have enacted the same tax bill without the large offsetting “pay for” of revenue raised from the SALT cap.

Going forward, leaving untouched the rest of the TCJA changes, restoration of the SALT deduction would mainly benefit high-income residents of New York and a handful of other high-tax states. And it would cost the Treasury at least $80 billion a year at a time when the federal government is already pouring out trillions in new spending.

U.S. Rep. Thomas Suozzi of Nassau County, citing Cuomo’s grossly misleading SALT impact statistics, has threatened to block President Biden’s forthcoming proposals for tax hikes unless they include repeal of the SALT cap. But restoring full SALT deductions would be an exceedingly heavy lift for congressional Democratic leaders, including New York’s own Charles Schumer, the majority leader of the Senate. Republicans and conservatives relish the opportunity to accuse Democrats of favoring a bigger tax break for the wealthy. Progressive Democrats, such as Rep. Alexandria Ocasio-Cortez, are sure to join the chorus in opposition.

In the meantime, this much is certain: