Perhaps the most remarkable thing about Governor Cuomo’s Medicaid budget is how little it changes the program’s spending pattern.

In spite of a once-in-century pandemic that rocked the state’s health-care system and decimated state revenues, the governor is proposing 4.7 percent growth in overall Medicaid spending for FY 2022 – compared to 4.5 percent this fiscal year, and 4.7 percent the year before. As seen in the first chart below, total spending rises in a virtually straight trajectory. 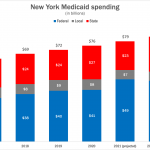 Underneath the surface, the program saw considerable turmoil.

The governor’s Medicaid Redesign Team proposed $2.2 billion in cost-cutting changes to close a pre-existing deficit, much of which was delayed because of strings attached to federal relief funding.

The fast-spreading novel coronavirus caused some hospitals to overflow and others to empty out for lack of elective procedures. Thanks to relief legislation, the federal share of Medicaid funding rose and the state and local shares shrank.

Meanwhile, enrollment surged as the economy crashed and jobs disappeared.

At the bottom line, however, those swirling currents seem to have cancelled each other out. They left the state with the same problematic growth trajectory – at roughly three times the inflation rate – that existed before the COVID-19 crisis began.

On a quarterly basis, spending has fluctuated dramatically, apparently a byproduct of payment delays that the Cuomo administration has used to manage – and conceal – a burgeoning deficit (see second chart). This dysfunctional phenomenon, too, is consistent with the pre-pandemic normal of New York Medicaid. 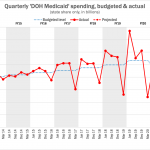 The fact that these trends are steady does not make them sustainable. Even when the economy was strong, Medicaid’s growth rate was bursting past expectations and throwing the state budget out of balance. The state can afford it even less now, with a crippled economy and multi-billion-dollar gaps to close for years to come.

Yet the governor’s budget makes little effort to apply the brakes. It anticipates that overall costs will rise by $3.7 billion – and that the state’s contribution will jump $5 billion, or 22 percent – on top of what is already by far the heaviest Medicaid spending in the United States.

To make that even remotely possible, Cuomo is betting the newly installed Biden administration will send New York billions more – effectively relying on short-term relief to further put off a necessary reckoning.

That’s a short-sighted strategy. If he and Legislature tolerate excessive Medicaid growth now, they will only have to cut deeper when the temporary federal money inevitably goes away.