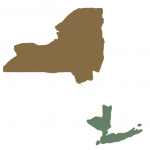 If the New York counties north of the New York City metro region were to split off and become a separate state, how would it rank nationally?

The question is prompted by the rally held in the Southern Tier last weekend by a coalition of groups whose members want upstate to secede from the rest of New York. Not all the advocates favor creation of a separate state, however.  Some favor absorption into Pennsylvania, while others suggest avoiding the constitutional hurdles of full statehood by changing New York’s own constitution to create two “autonomous regions” within the outline of a “token” remaining single state.  In addition, their definitions of “upstate” seem to differ.

But here’s a thought experiment: assume that, under one formulation or the other, the current State of New York effectively was split in two. Assume, further, that what is now the 12-county Metropolitan Transportation District—New York City, Long Island and the Hudson Valley northern suburbs, which pay added regional taxes and fees in support of the Metropolitan Transportation Authority—was designated as South New York, leaving everything north of the Dutchess-Orange line to form North New York. Counting the two entities on a new list of 51 states (or, if you prefer, autonomous regions), based on the latest available data, North New York at least initially would have:

As for South New York, its population would rank fourth largest at  13.2 million; its per-capita income would rank second highest at $60,301; and its private-sector employment would also rank fourth, at 5.4 million.

The two New Yorks have been on sharply divergent economic tracks for most of the past 15 years.  North New York has added private jobs more slowly than all but eight states since 2009, although its growth rate (on the imaginary ranking of 51 states) improved to 34th during the 12 months ending in June. Meanwhile, South New York has had a better job creation rate than all but five states since 2009, although its growth rate fell behind those of 11 states in the last 12-month period. If not exactly impoverished, Northern New York is not particularly prosperous, either. As of 2013, the per-capita income of the 50 upstate counties was 29 percent below the downstate average—and 4 percent below the national average.

An independent upstate presumably would pass gun control laws that looked very different from the controversial SAFE Act, which has been the spur for many secessionists, and it might allow shale gas exploration via hydraulic fracturing as well. In general, an autonomous upstate presumably would tilt at least a bit more in favor of business and away from heavy handed labor and environmental regs. But taxes would not necessarily be lower than they are now; in fact, they would have to be higher unless upstate politicians make the spending cuts necessary to make up for the loss of current revenue subsidies from the wealthier downstate region.