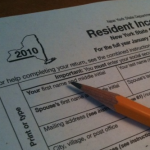 Equally significant, the income tax section (Part TT) of the budget’s revenue bill decouples the previously temporary cuts in middle-income brackets, which will now be expanded and extended permanently, from the state’s “millionaire tax,” which is still due to expire at the end of 2017.

The following table shows how the newly enacted tax rates will be phased in, and how they will compare to rates set under the prior permanent law, the 1995 Taxpayer Relief Act, which became fully effective in 1997, and under the temporary tax law now in effect. 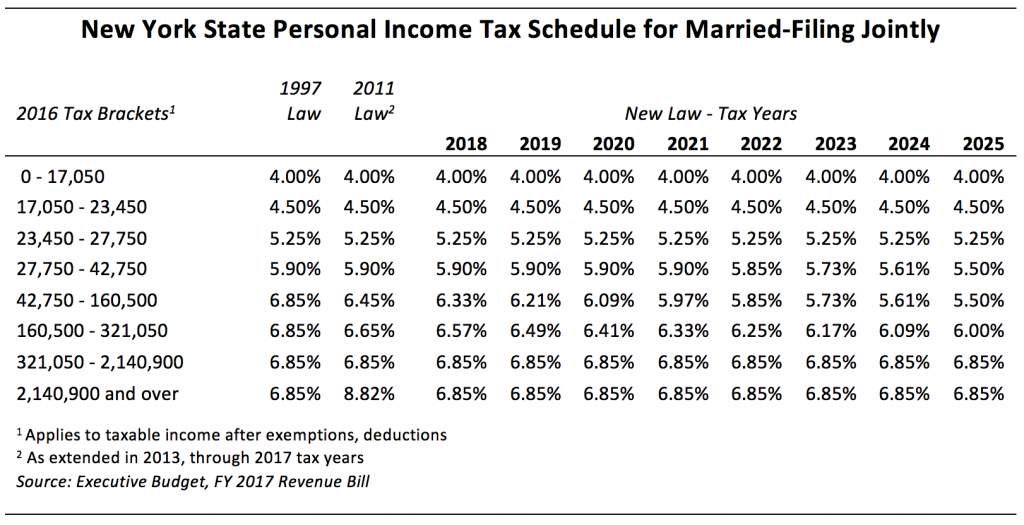 Note: the taxable brackets reflect inflation “indexing” since 2011, a long-overdue reform that will, unfortunately, be discontinued under the new law effective in 2018. As under current and previous law, tax brackets for single filers will be set at half the income levels shown for married-joint filers, and thresholds of heads of household will be at 75 percent of the married-joint level. The top rate reflects the current law scheduled to sunset at the end of 2017. Note, also, that the new law ultimately combines the current 5.9 percent and 6.45 percent brackets into a single new 5.5 percent bracket.

The tax cuts tilt towards downstate suburbs and relatively affluent (but not super-wealthy) neighborhoods of New York City. Reflecting the state’s wide regional disparity in household earnings, savings over the eight-year phase-in period will flow disproportionately to the “middle class” as defined by the current standards of Chappaqua, Garden City and the Upper West Side of Manhattan. Families with incomes more typical of those currently found in upstate locales such as Jamestown, Binghamton and Syracuse—who, to be sure, pay lower effective rates to start with—will get much, much less out of the deal.

The following table depicts how the Senate’s tax cut would change income taxes for hypothetical families of four—married couples with two children under 17—at four different income levels, based on federal estimates of 2015 median family-of-four incomes in different locations, upstate and down. Taxes are shown at intervals: current, the halfway point of implementation in 2021, and the final phase-in year of 2025.

The table shows a static income distribution based on current medians, but even relatively low income growth between now and 2025 is likely to push more upstate households into higher tax brackets, raising their likely savings from the new tax law compared to the old one. For example, with normal growth, the median family in Syracuse by 2025 will probably be making at least as much as the current median in Albany, which in turn may have risen by then to match the current Westchester County level.

A press release issued by Governor Cuomo’s office estimated that 6 million tax filers will realize total savings of $4.2 billion a year when the cuts are fully phased in by 2025. That would work out to an average of $700—higher, obviously, than estimated for the downstate median families in the table above.  Two factors probably explain that: first, the official estimate assumes a level of income growth that would boost median incomes appreciably by 2025, and second, the average is raised by the much larger savings, ranging from $1,000 to $2,000, that will flow to households with incomes between $200,000 and $300,000. **PS–A third explanation: the estimates include the previously temporary tax cuts passed in 2011, which are worth about $700 million a year.**

The newly enacted income tax cut is best evaluated in the context of what came before it:

As matters stood until this week, the continuation of the middle-class tax cuts would require a further extension of the millionaire tax. However, the new tax cut package changes that legislative dynamic.  Tax cuts in lower brackets have not only been extended, they will stretch into the middle of the next decade. And the 8.82 percent top bracket could be allowed to expire at the end of next year without jeopardizing the rate cuts in lower brackets.

Cuomo’s fiscal 2017 Executive Budget financial plan projected that, if spending growth was held to the governor’s self-imposed limit of 2 percent, the state would have a fiscal 2018 surplus of $522 million, dropping to $98 million in fiscal 2019 and rebounding to nearly $1 billion in fiscal 2020, assuming the expiration of the 8.82 percent top bracket.  So the newly enacted tax cuts clearly are affordable, although it would be a tight squeeze in the first year (when the size of the cuts are small).***See endnote.**

**An update here on how to accommodate the tax cuts starting in 2019.**

How about the impact on future state revenues?  Is that something to worry about?

The answer is no—as long the state continues to restrain spending.

The projected annual savings of $4.2 billion is equivalent to about 5 percent of projected total state tax receipts for fiscal 2018, when the phase-in period is supposed to start. By comparison, the 1995 Taxpayer Relief Act cuts initially were valued at $4.4 billion —13 percent of total tax receipts at the time.

Meanwhile, 2020 will see the expiration of more than $1 billion a year in temporary state property tax rebates enacted last year. Going forward, then, the net impact of the new tax cuts will be that much smaller.

Another way of looking at it: in the last 15 years—a volatile period in which the state budget was buffeted by two sharp economic downturns and absorbed various temporary targeted tax cuts, and excluding revenue from the set-to-expire “millionaire tax”—total state tax receipts have risen by an average of 3.3 percent a year.  At that rate, absent any other change, tax receipts will rise $20 billion between 2018 and 2025.  And in that context, $4.2 billion a year in slowly phased-in tax cuts can hardly be portrayed as a major hit on the financial plan.

As always, the state’s ability to keep the tax-cut promise is ultimately a matter of choices and priorities—for the governor and the Legislature.

** The original version of this blog post incorrectly cited the wrong numbers from the bottom of the wrong financial plan table as indicative of Cuomo’s future year projected “surpluses,” which actually represented net expenditure savings from adherence to the cap.**