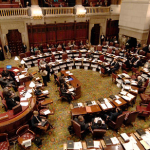 Now that the state has enacted its biggest personal income tax (PIT) cut since the mid-1990s, Governor Andrew Cuomo and the Legislature next year will need to decide how to accommodate the tax cut in future budgets.

Cuomo’s financial plan projections, reflecting the tax law as it stood before adoption of the fiscal 2017 budget, indicated that even if budget growth is held to 2 percent, further spending reductions would be necessary to accommodate the new and extended “middle class” PIT cuts now scheduled to begin taking effect in 2019. If anything, the combination of PIT cuts and added spending in the new budget could make the prospective out-year gap larger.

For Assembly Speaker Carl Heastie and other legislative Democrats, the solution is a no-brainer: raise taxes on the highest incomes, starting with renewal of the “millionaire tax,” a temporary 8.82 percent flat rate tax on filers whose incomes start at $1 million for singles and $2 million for married couples, which is now scheduled to expire at the end of 2017. Effectively a 29 percent surcharge on top of the permanent-law rate of 6.85 percent, the tax raises more than $3.5 billion a year.  The temporary rate is among the highest statewide income tax rates in the country—and nearly a full percentage point higher than the 7.875 percent top rate left by Governor Mario Cuomo, back in 1994.

Last week’s budget bill decoupled the millionaire tax rate from tax cuts for New Yorkers earning between $40,000 and $300,000, which were first temporarily adopted as part of a package deal at the end of 2011. Including middle-class tax brackets that were previously scheduled to expire along with the millionaire tax, the PIT cuts enacted with the budget will have a revenue impact of around $1 billion starting in fiscal 2019, rising steadily thereafter to a level of $4.2 billion by 2025.

Assuming Senate Republicans retain their slim majority after this year’s elections and thus still have a voice in the decision, they (and Governor Cuomo) needn’t cave to a straight extension of the 8.82 percent rate. There’s are two simpler alternatives:

First, pull the plug a year ahead of time on temporary property tax “rebate” credits approved at their urging last year.

The temporary property tax credit program will cost about $1 billion in fiscal 2019 and $1.3. billion in 2020, enough to accommodate the impact of the extended new PIT cuts in those two years. And unlike the gimmicky property tax credit, an income tax cut offers permanent, recurring savings to a much larger number of New Yorkers, including renters and most small business owners. (It would also fulfill two more of the “5 Steps to Reforming New York’s Tax Code” recommended by the Empire Center and Tax Foundation in 2013.)

Second: eliminate corporate tax loopholes and subsidies, starting with the $420 million-a-year Film Tax Credit program—which is due to expire after 2019.