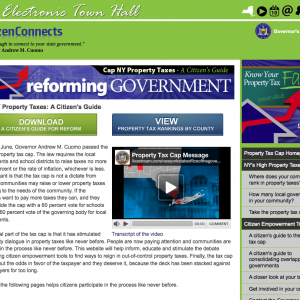 But the Tax Foundation’s countywide data, which reflect the tax on a median-priced home, aren’t actually very useful in comparing property tax burdens in different communities.  Taxes within counties can differ significantly from one town or city to the next, even within the same town.  That’s mainly because school taxes dominate the tax levy, and school districts cross town lines. One town may be divided into portions of two or three — or even a half dozen or more — school districts. In addition to county, town and school taxes, property owners also may pay taxes to one or more special districts that exist to fund libraries, fire protection and other special purposes. Each is subject to Cuomo’s new cap on property tax levies.

The best tool for drilling down and comparing property tax burdens at the local level in New York is BenchmarkingNY at the Empire Center’s SeeThroughNY transparency website, which is based on state comptroller’s “equalized” property tax levy data.  The drop-down toggle buttons inBenchmarkingNY’s “Property Tax by Location” feature can be used to generate comparisons of the property tax burden in thousands of different slices of communities across the state.  Users have the option of scrutinizing effective rates alone, or of having the tool calculate taxes on a particular property value. The results box also can be expanded to show the breakdown of how each different tax rate contributes to the whole.

Say, for example, you want to compare taxes in the the neighboring Albany County towns of Bethlehem and Colonie. Bethlehem contains portions of three school districts, and Colonie contains all or part of six. So say, further, that you want to compare the portion of Bethlehem located in the Ravena-Coeymans-Selkirk (RCS) School District with the portion of Colonie located in the North Colonie School District.  Assuming the same countywide median home-price estimated in the Tax Foundation data ($206,400), BenchmarkingNY produces this comparative result: 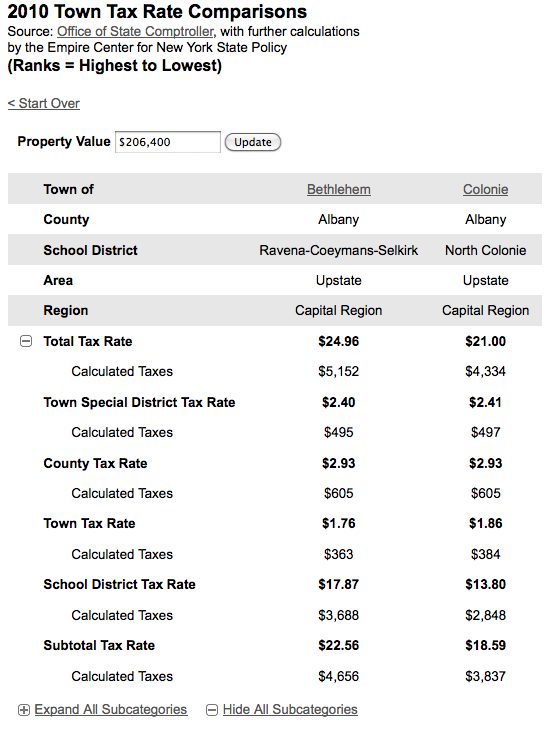 Our comparison tool indicates the tax on the median-priced house is a whopping $818 higher in the RCS School District in Bethlehem than it would be on a house of the same value in the North Colonie School District in the town of Colonie.  Why do the Bethlehem residents pay a 19 percent tax premium, compared to nearby Colonie? The breakdown of taxes by jurisdiction provides the answer: it’s due almost entirely to the higher tax rate in the RCS school district.

Note that taxes in both communities in this comparison are considerably higher than the $3,334 countywide median suggested by the Tax Foundation data, which is based on the U.S. Census American Community Survey and not on hard tax levy or collection data.

While it permits more detailed comparisons, BenchmarkingNY isn’t perfect, of course. As we point out in our data note:

The effective property tax rates presented in these databases are approximate, based on estimates by the Office of the State Comptroller. The effective rates are most accurate as a comparative overall measure of tax burdens as a share of property values in different New York communities. However, because local property assessment procedures vary widely, the estimated tax levels for sample property values produced by our “Property Tax by Location” tool will not always match actual tax bills for properties of the same value in those communities. This is particularly true of localities whose assessments are significantly out of date, or which have an unofficial practice of over-assessing commercial property. In a few dozen cities and towns that have established preferential tax rates for owner-occupied homes – including Albany, Binghamton, Buffalo and Rochester – the local effective rate presented here is an average of “homestead” and “non-homestead” tax rates. In addition, estimated property tax bills do not reflect the impact of the state “STAR” tax break, which typically reduces the school district portion of property tax bills by 10-20 percent, or by more than 30 percent for qualified seniors.

As property taxes receive the more intensive scrutiny they deserve, we will keep working to make BenchmarkingNY even better and more useful to taxpayers across New York.