A closer look at newly released data about coronavirus in New York nursing homes raises questions about what factors contributed to high infection and mortality rates—and what reforms should be adopted in response.

A package of bills advancing in the Legislature includes new nursing-home regulations focused on staffing levels and ownership structure.[2] Both policy approaches were seemingly bolstered by a Jan. 28 report from Attorney General Letitia James, which linked nursing home deaths to low staffing and for-profit ownership.[3]

In performing its analysis, however, James’ office relied on incomplete information. Its authors did not have access to data on nursing home residents who died in hospitals, because those numbers were being withheld by the Cuomo administration.[4] The report also limited its examination to the period before mid-November. As a result, more than 6,000 deaths were omitted from its analysis.

With the addition of more complete data—made possible by a Feb. 3 court ruling in a lawsuit brought by the Empire Center—the statistical picture changes significantly. The evidence of a connection between coronavirus deaths, staffing levels and ownership types becomes weaker or disappears completely.

Here is a summary of key findings from a fresh analysis, also shown in the tables and charts below.

These findings highlight the risks of attempting to fashion a regulatory response to the pandemic—in nursing homes and elsewhere—without taking the time to develop a full understanding of what happened over the past year. The report does not attempt to gauge the impact of the proposed reforms on the underlying quality of care in New York’s long-term care facilities.

In its January 28 report, the attorney general’s office argued that low staffing levels in nursing homes was associated with higher death rates from the novel coronavirus. As evidence of that connection, the report presented a table (reproduced in Table 1 below) comparing death rates in nursing homes based on their star ratings for staffing from the U.S. Centers for Medicare & Medicaid Services (CMS).[5] It showed that homes with the lowest staffing grade of one star had an aggregate COVID-19 mortality rate of 7.13 percent, compared to 4.94 percent for homes with a five-star rating.

However, that table was based on the limited data available in mid-November, which encompassed 6,645 deaths, only half the number that are documented now.

When that table is brought up to date, it shows no clear association between lower staffing grades and higher coronavirus mortality (see Table 2). Homes with a three-star staff rating showed the largest percentage of deaths, at 13.62, compared to 12.98 for two-star homes and 12.14 for one-star homes.[6] 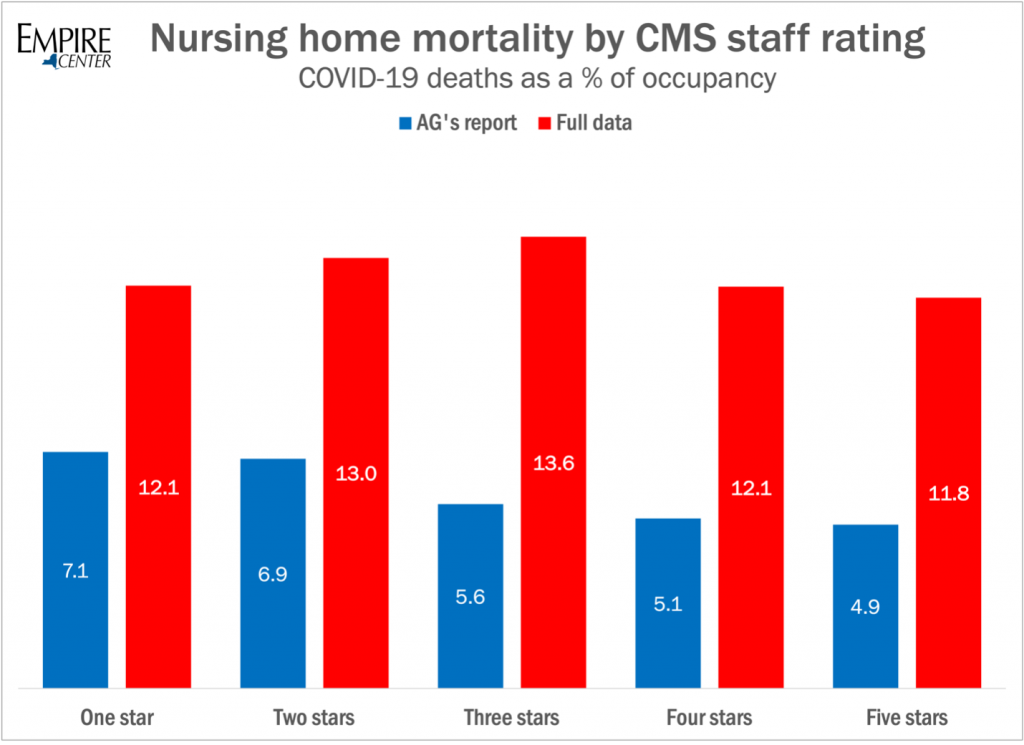 That statement seemed to imply that the death rate in those facilities was disproportionately high. But it did not say how many residents lived in those 280 facilities, making it impossible to know how the mortality rates compared.

Using updated death data and federal ratings,[8]v there are now 251 for-profit facilities with one- or two-star staffing grades as of January. Through Feb. 9, those facilities accounted for 5,862 deaths, or 44 percent of the statewide total. That is roughly in line with their share of the state’s pre-pandemic nursing home population, which was 43 percent.

Overall, the number of COVID-19 deaths in all for-profit nursing homes was 13.3 percent of their pre-pandemic population, compared to 11.8 percent in government-owned facilities and 12.4 percent in not-for-profit facilities (See Table 3).

It should be kept in mind, however, that for-profit nursing homes are disproportionately concentrated in New York City and its surrounding suburbs, where coronavirus infection and death rates have been much higher than upstate.

Within the downstate region (defined as New York City, its northern suburbs and Long Island), the death rate among for-profit homes, at 13.7 percent, was the same as the rate among government-owned facilities and slightly lower than the rate among not-for-profit facilities, at 14.5 percent.

A possible factor behind this disparity was the Health Department’s March 25 guidance[9] urging nursing homes to accept COVID-positive admissions during the height of the spring wave, a policy that was effectively canceled on May 10.

In the downstate region, for-profit homes accepted COVID-positive patients in rough proportion to their overall size—accounting for 73 percent of the nursing home population and 78 percent of the admissions.

The ownership sub-group with the worst mortality rate was the seven facilities owned and operated by the state government—five of which are designated for veterans (see Table 5). Collectively, the seven homes lost 291 residents, or 18.4 percent of their pre-pandemic population, which was five points higher than the statewide average.

The Long Island State Veterans Home, which is affiliated with the State University at Stony Brook, saw 121 deaths through Feb. 9—a total that was second only to 138 at the Harris Hill nursing home in Erie County, which was designated as COVID-only facility in May. The share of residents who died at the Long Island State Veterans Home, at 34.7 percent, was the 12th highest in the state.

Lawmakers are understandably eager to respond to a crisis that took the lives of one out of every seven nursing home residents in New York State.

The Legislature’s package of possible reforms includes a long-standing bill that would mandate minimum staffing ratios for both nursing homes and hospitals —a measure that would add substantially to providers’ labor costs with uncertain benefits for patients.[11]

The Legislature is also contemplating a bill that would block for-profit operators from opening new nursing homes or expanding their existing ones.[12] In a similar vein, Governor Cuomo has proposed capping nursing home profits and executive salaries and requiring them to spend at least 70 percent of their revenue on patient care.[13] 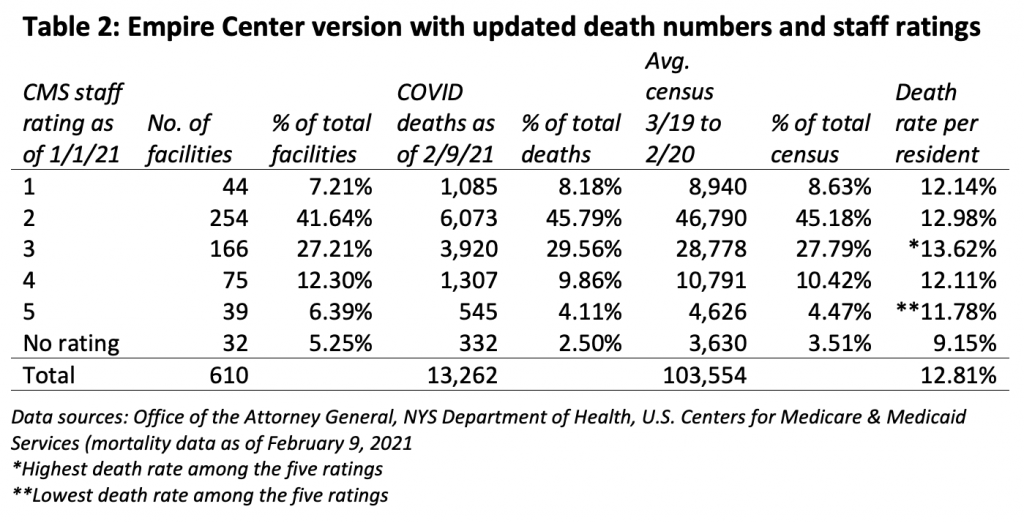 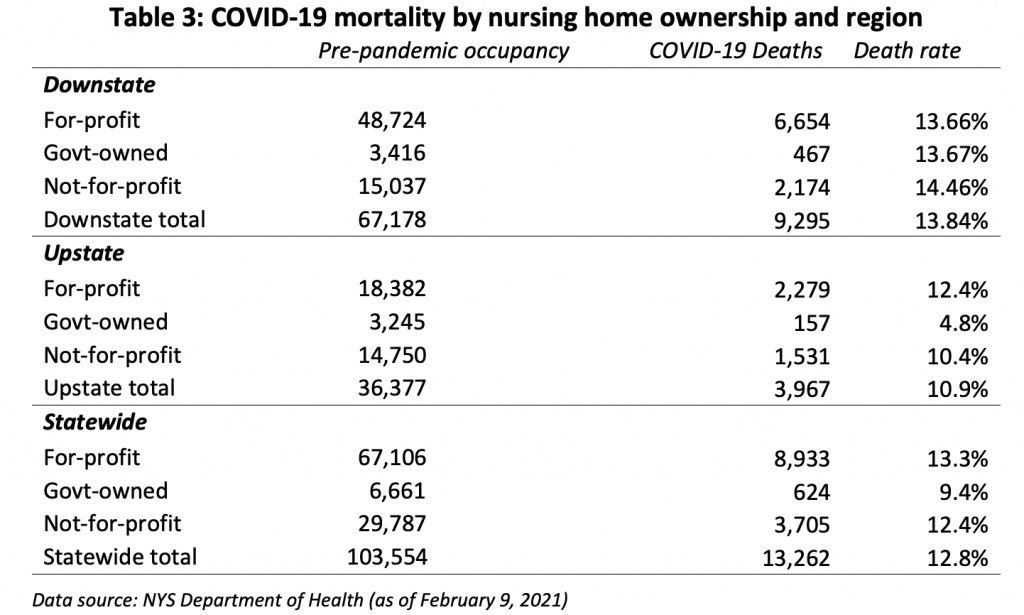 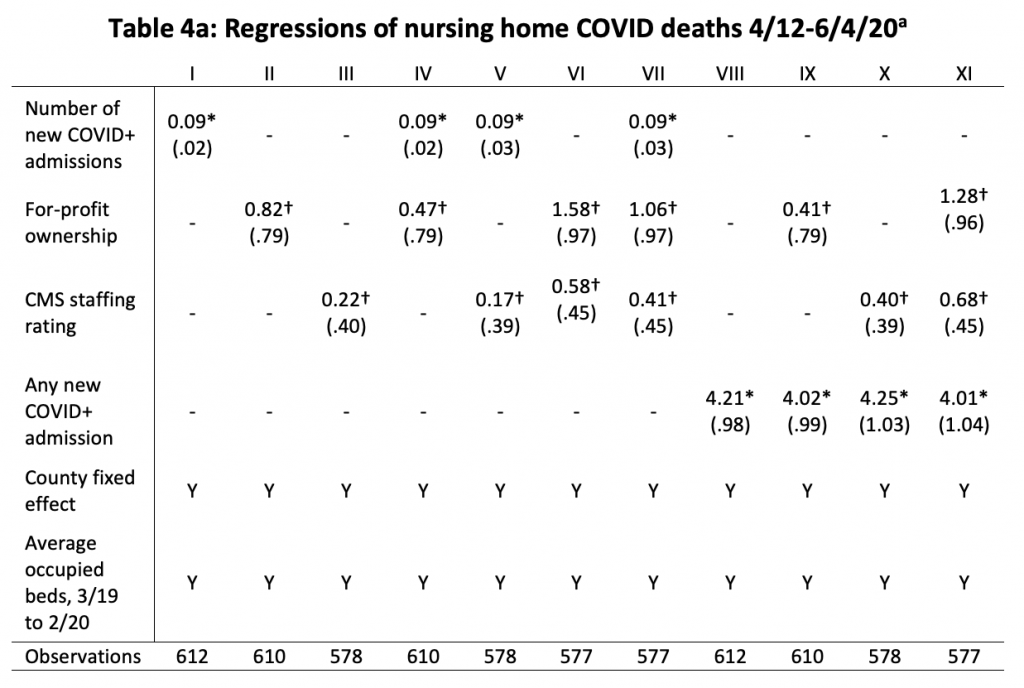 [1] Updated to correct and clarify Table 4 (now shown as 4a) and to add a Table 4b, both on p. 7. The corrections did not materially change the results.

[8] The Attorney General report used star ratings from the Centers for Medicare & Medicaid Services as of June 2020. The Empire Center used CMS star ratings as of January 2021.