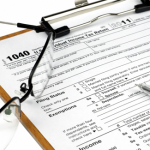 For the millionaire earners who generate an outsized share of New York State’s income tax receipts, a congressional deal to trim the top tax rate in the final federal tax reform bill will take some of the sting out of losing the state and local tax (SALT) deduction.

But such a change won’t solve a bigger, more fundamental problem: losing SALT will be tantamount to a significant increase in effective New York’s state and local tax rates, relative to other states. The impact of such a change will be greatest on taxpayers with incomes above $1 million, who generate more than 40 percent of the state’s income tax (which in turn represents two-thirds of all tax revenues).

Republican lawmakers, scrambling to reach agreement on a final tax bill that they hope to pass next week, are coalescing around a plan that would slightly raise the proposed corporate tax rate, lower the top rate on the richest Americans and scale back the existing mortgage interest deduction.

In a frenzy of last-minute negotiations, Republicans drew closer to agreement on nudging the corporate tax rate to 21 percent, up from the 20 percent in the bills that passed the House and Senate but still lower than the current 35 percent corporate rate, according to a lawmaker and a person briefed on the discussions.

They are also considering lowering the top individual tax rate to 37 percent, from the current top rate of 39.6 percent, to assuage concerns from some wealthy taxpayers who fear that their tax bills could rise under the current legislation, which eliminates a host of individual tax breaks.

Yet, as shown in the table below, even with the additional cut in the top rate, the combined federal, state and local income tax rate on the wage, salary, bonus and self-employment incomes of the highest-earning New York City residents would still increase by a little more than a percentage point—to 49.7 percent from the current 48.45 percent, or to 53.27 percent from 52.02 percent for self-employed people already subject to New York’s “millionaires tax.”

Elsewhere in New York State (except in Yonkers, which has its own surcharge), the combined income tax burden would drop very slightly. 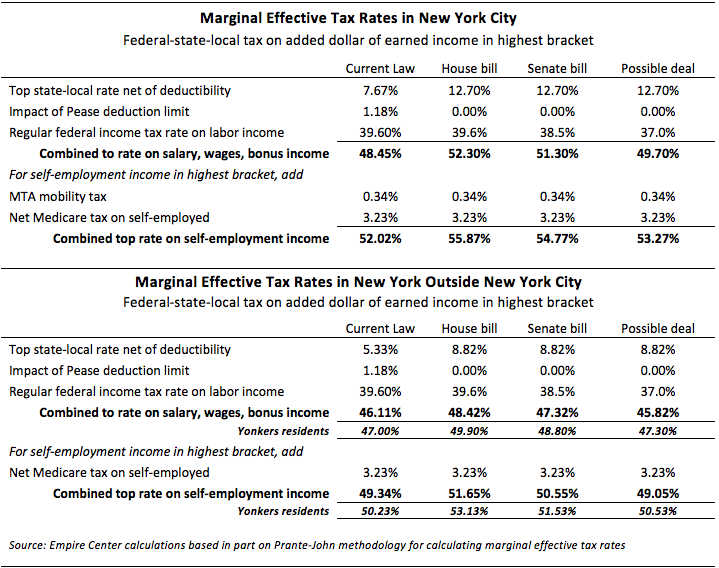 First, New York’s net tax price, compared to low- or no-income tax states, would rise higher than ever, giving residents of the Empire State a significant added incentive to migrate if and when the choice is open to them.

Second, because property tax payments are capitalized into house values, the effective increase in net property taxes will tend to depress the values of higher-priced, higher-taxed homes in New York suburbs.

This impact will occur regardless of how the tax plan affects individual homeowners. The enactment of an optional property tax deduction capped at $10,000, as proposed in the Senate bill, also will do little to offset the likely reduction in values, because the impact of cap will vary considerably among taxpayers based on family size, the age of the primary filer, and the type of income reported.

In any case, the idea of further cutting the top rate could create its own problems for passage. As the Times also reported:

In a sign of how difficult it is to build consensus for such a fast-moving bill, Senator Susan Collins, Republican of Maine, said on Tuesday that she did not like the idea of lowering the top individual rate, which is currently 38.5 percent in the Senate bill and 39.6 percent in the House version.

Lost in all the talk about SALT and about individual income taxes in general is a very important point. As described in today’s [subscription required] Wall Street Journal:

The core of the [federal tax reform] plan is a vast reordering of U.S. business taxation, not only for big corporations like Apple Inc. and Walmart Stores Inc. but also for millions of partnerships, limited-liability companies and other so-called pass-through companies that pay tax through individual rather than corporate returns.

The tax bill would lower corporate tax rates to near 20% from 35% while leaving top individual rates just below 40%. It would also create a new system for pass-through firms that would exist in a gray area—part business and part individual. The Senate and House both want to lower these entities’ taxes, too, but have different ways of doing it.

A significant subset of New York’s highest earners, especially but not only in New York City, stand to benefit from the changes in pass-through taxes—but at the moment, so much is unsettled that they can’t be sure how they will be affected.

This uncertainty probably explains a good part of the recent weakness in the state personal income tax receipts, which has prompted Governor Cuomo’s Division of the Budget to project a $4.4 billion budget gap for fiscal 2018.