The redoubtable Larry Littlefield has boiled down the latest U.S. census data on local government employment into a handy spreadsheet with a regional breakdown showing the extent to which New York exceeds national averages in this category.  His Room 8 post on the issue is here, and the spreadsheet is here.  Based on his summary calculations, I generated this summary chart: 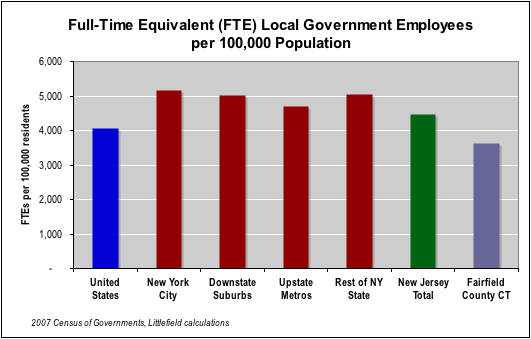 Littlefield notes that, since the last Census of Governments in 2002, local government and school district employment has risen even higher in the rural counties of upstate New York (designated “Rest of NY State” in the chart above), where it was “sky-high” to begin with.

How can they afford it? Perhaps they can if someone else is forced to pay for it. That might provide an understanding of why “Republican” State Senators are pushing against any reduction in state school spending. It has to do with excess jobs, not education.

Then again, the downstate suburbs also have large local government establishments, averaging 5,010 full-time equivalent (FTE) local government employees per 100,000 population, or roughly 20 percent more than the national norm.  New York City, unsurprisingly, also is labor intensive.  The difference between the Empire State and U.S. average employment level is only partially explained by the extent to which New York relies on local governments to deliver services provided at the state level elsewhere.