The newly enacted wage hike for home care aides is likely to increase workers’ pay more than three times as much in the New York City area as in other parts of the state, according to a review of labor data.

The disparity would seem to undermine the legislation’s stated purpose of addressing worker shortages: The hike will mean bigger raises for downstate areas that have a high level of home care employment, while providing relatively modest increases in upstate areas where workers are in shorter supply.

The wage hike was approved this month as part of the state budget. It requires home care aides to be paid at least $2 more than the standard minimum wage beginning this October, and a total of $3 more as of October 2023. That will ultimately lift the minimum hourly rate for home care to $18 in New York City, Long Island and Westchester County, and $16.20 everywhere else.

Although the statutory increase is nominally the same for all parts of the state, its practical effect will be much bigger in downstate areas.

As of May 2020, as seen in the chart and table below, mean hourly wages for home health and personal care aides ranged from a low of $15.03 in Western New York to a high of $16.55 in the Hudson Valley. (These figures are based on three years’ worth of semiannual surveys dating back to 2017, so the current rates are probably higher.) 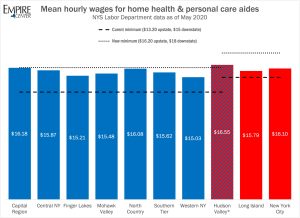 *Westchester is subject to the higher minimum wage; the region’s other counties are not

In most upstate areas, the typical pay for aides is already $2 or more above the regional minimum of $13.20 an hour. For those workers, complying with the new law would require an average increase of less than $1.

In New York City, by contrast, the current mean for home care aides is just $1.10 above the current minimum, meaning their wages would have to increase an average of $1.90 to comply with the new law. On Long Island, the average increase would be $2.21.

The same comparison cannot easily be made for the Hudson Valley. Its largest county, Westchester, is covered by the higher minimum wage while Dutchess, Orange, Putnam, Rockland, Sullivan and Ulster are not – and the Labor Department does not produce county-level wage data.

Upstate (excluding the Hudson Valley), the average gap between current mean pay and the new minimum is 56 cents. For New York City and Long Island, the average gap is $2.06, or more than three times greater.

Advocates of the hike for home-base caregivers had originally pushed for a larger increase – to 50 percent above the standard minimum wage. They cited incomplete or dubious statistics, including a claim that the state faces the nation’s most extreme shortage of home care workers due to low pay.

The wage hike included in the state budget, although smaller than advocates had sought, is expected to cost $7.7 billion over the next four years, according to an estimate from the governor’s office. The bulk of that money will come from the state’s taxpayer-funded Medicaid health plan for the poor and disabled, which covers most New Yorkers receiving home care.