New York’s Medicaid and Child Health Plus programs added three-quarters of a million enrollees during the coronavirus pandemic, roughly matching the pace of a national surge in sign-ups.

Between February 2020 and January 2021, the combined rolls of the two health plans grew by 760,000 New Yorkers, the second-largest total in the country, newly updated federal data show. 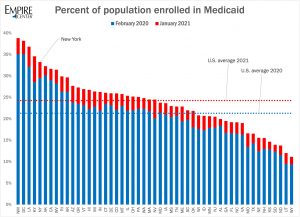 As of January, the two government-sponsored health plans for the low-income and disabled were covering just over one in three New York residents, the fourth-highest fraction in the country.

The nationwide enrollment surge appeared to be primarily driven by the pandemic-induced recession, which threw almost 2 million New Yorkers out of work and decimated the incomes of many more.

Another factor was a slowdown in Medicaid attrition. Before the pandemic, tens of thousands of people per month would drop off New York’s rolls for failing to re-register or otherwise losing eligibility. For the past year, however, states were required to suspend that process as a condition of receiving federal emergency relief. That suspension is expected to continue through at least the end of 2021.

Along with higher enrollment comes higher costs for what is already one of New York’s most expensive programs. This year’s state budget projects that the state share of Medicaid will spike by 22 percent or $5 billion. Total Medicaid spending, including federal aid and local contributions, is expected to increase by 10 percent or $8 billion.

Heading into the pandemic, New York spent more per capita on Medicaid than any other state—roughly double the national average—due to a combination of relatively broad eligibility, extensive benefits and high provider costs.