Following a record loss between 2020 and 2021, New York State’s population decreased by another 180,341 people during the 12 months ending July 1, 2022, according to just-released U.S. Census Bureau estimates.

New York’s population decline from mid-2021 to mid-2022 was driven by a net domestic migration outflow of 299,577 residents — meaning nearly 300,000 more people moved out of New York than moved in from other states during the previous 12 months. This was the Empire State’s third-largest net domestic migration loss on record, exceeded only by the 2020-21 loss of 352,185 residents and a net outflow of 314,153 people in 1973. Over the combined two-year period, New York has lost a net 651,742 residents to other states — exceeding the combined populations of Buffalo, Rochester, and Syracuse.

The latest numbers indicate the outflow of New Yorkers triggered by the COVID-19 pandemic in 2021 continued well into 2022. 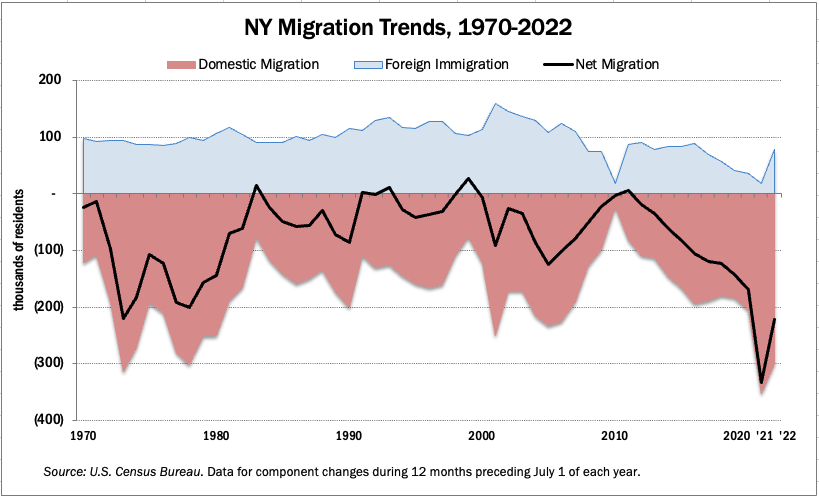 During the same period covered by the new census data, New York State gained 77,923 foreign immigrants, the largest number since 2017, following a steep drop during the post-pandemic period. (The estimates do not indicate how much of the international gain consisted of illegal immigrants transported to New York City from the border in Texas.) Combining international and domestic flows, New York’s negative net migration of -221,634 people also represented the second-largest decline on record.

Today’s latest estimates raised New York’s total population decline to 524,079 since the decennial census count of April 1, 2020, wiping out nearly two-thirds of the state’s surprisingly large population increase since the 2020 national census, which was the basis for its recent congressional and legislative reapportionment.

Other notable trends from the Census Bureau’s Vintage 2022 state estimates:

With birth rates slumping nationally, New York’s 2021-22 natural increase in population was the third largest births-over-deaths gain of any state, behind only Texas (+118,159) and California (+106,155). There were negative natural change numbers in 23 states. (Retirement haven Florida was at the bottom of this ranking, with 40,216 more deaths than births in the latest period.) 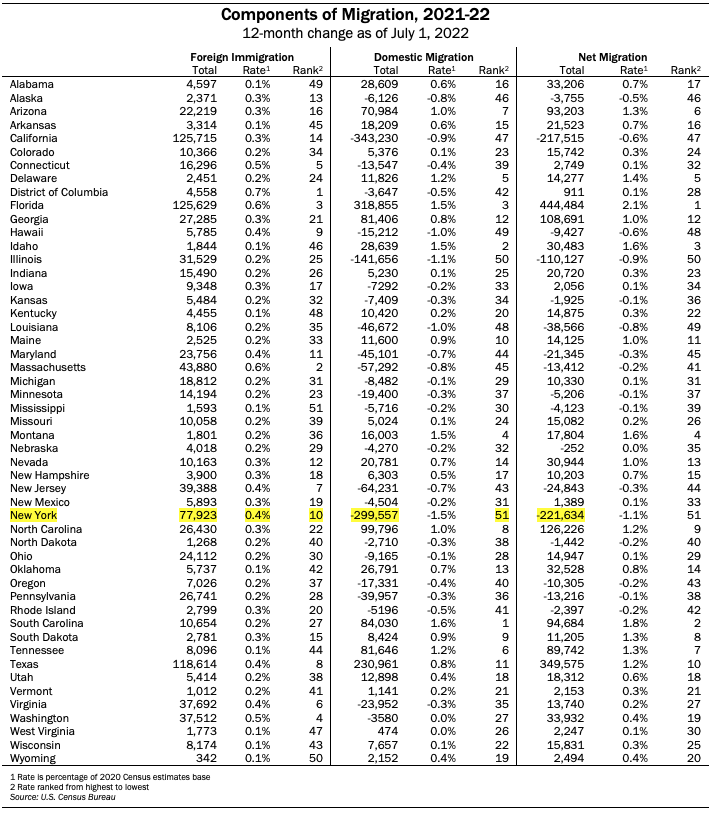 New York population losses to other states were already mounting in the years leading up to the pandemic, and a slowdown in foreign immigration had brought the net migration decrease to levels rarely seen since the 1970s. But as shown above, the post-pandemic changes of the past two years have been (literally) chart-busters.

In absolute terms, whether measured from July 1, 2020, or from the decennial census count as of three months earlier, New York’s net domestic loss in the pandemic era has been exceeded only by California’s. But in relative terms, New York has been far and away the biggest loser, with a net domestic migration outflow equivalent to 3.24 percent of its July 1, 2020, estimated population.