New York’s K-12 public school enrollment has dropped substantially for a second year in a row, for a total decline of 5 percent since the start of the pandemic.

The same data, posted Monday on the New York State Education Department website, show a drop of almost 60,000 students—2.38 percent of the total student population—in the past year alone. Last year, the schools suffered a similar historically sharp decline in enrollment. Final figures for the 2020-21 school year showed a 2.64 percent drop from 2019-20.

The pandemic-driven loss accelerated a steady decrease in New York State public school enrollment over the past decade as seen in the chart below. During that period, enrollment has fallen a total of eight percent, from 2,665,612 to 2,453,123—a loss of 212,489 students. 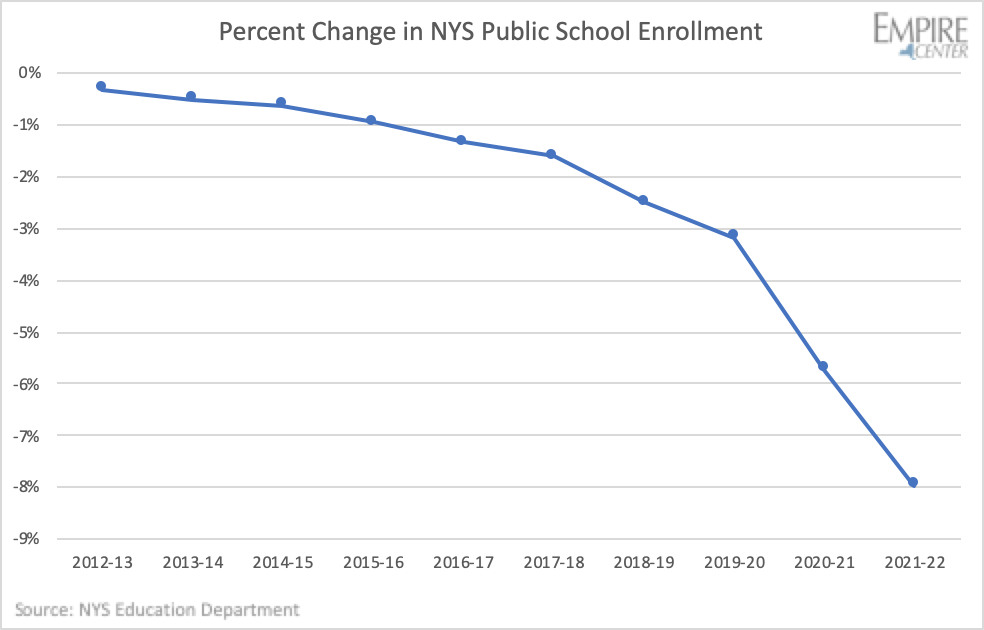 The Governor’s budget proposal for elementary and secondary education is the subject of a joint legislative public hearing taking place today in the Legislature.

Although New York already spends more per pupil than any state in the country—nearly twice the national average—the budget proposes an increase of $1.6 billion, or 8.1 percent, in state operating aid (aka Foundation Aid) for the public schools for the coming year. That comes on top of the $1.4 billion hike in Foundation Aid received in the current year. Hochul’s budget also includes a $500 million increase in non-Foundation Aid spending on education, for a total proposed increase in state education spending of $2.1 billion.