The taxpayer share of pension costs in New York’s suburban and upstate school districts will rise by up to $100 million in 2022-23 as a result of actuarial changes approved last week by trustees of the New York State Teachers’ Retirement System (NYSTRS).

The increase will follow a near-record return of 29 percent on NYSTRS investments in fiscal 2021, boosting net asset values to a new high of $146 billion and raising the pension plan’s five-year average return to an extra-healthy 11.9 percent.

With no further change in actuarial assumptions, strong investment gains would make possible a further reduction in employer pension contributions for NYSTRS members, now pegged at 9.8 percent of covered employee salaries for the 2021-22 school year. Instead, however, NYSTRS trustees accepted an actuarial recommendation to further solidify the pension plan’s finances—by nudging NYSTRS’ assumed rate of return from 7.1 percent to 6.95 percent. This will be the fourth in a series of reductions in the NYSTRS assumed rate of return since 2014, when it was 8 percent.

The assumed rate of return is a crucial variable in pension funding calculations because it also is used by public plans as the discount rate in projecting future flows of benefit payments. Since the employees’ own pension contributions are fixed at different income levels and capped, a lower discount rate requires the system to collect more money from the only other available source: employers. A higher discount rate would have the reverse effect.

The net impact of the slight decrease in the discount rate will be to nudge the 2022-23 NYSTRS contribution rate (payable in the fall of 2023) into the range of 10 percent to 10.5 percent, according to an actuarial report presented at last week’s trustees meeting.

As of last August, the average return assumption for all public pension plans was 7.06 percent, and the median was 7 percent, according to the National Association of State Retirement Administrators—so NYSTRS is hardly pushing the envelope here. In fact, NYSTRS’ move was a hyper-cautious baby-step version of state Comptroller Thomas DiNapoli’s policy as sole trustee of the separate New York State and Local Retirement System (NYSLRS), which recently dropped its assumed RoR from 6.5 percent to just 5.9 percent—lowest among the nation’s large public plans.

As I wrote here in August, despite the further reduction in his discount rate, DiNapoli was able to produce a reduction in tax-funded pension costs by “resorting to a bit of a gimmick: pension contributions for 2022-23 won’t be based on ‘smoothed’ returns over the past five years but on a ‘restart’ of actuarial asset measures based on the supercharged fiscal 2021 result—an all-time record return off 33.55 percent that wiped out the fund’s small loss early in the pandemic market crash.”

NYSTRS, among the nation’s best-funded public plans, can’t be faulted for resisting the restart route, which carries its own financial risk. But the system’s trustees could and should have given more consideration to pushing their discount rate lower, closer to the NYSLRS level, which would require saving more now to cover mounting pension obligations in the future.

This table, grabbed from page 31 of the FY 2021 NYSTRS financial statement and independent audit report, illustrates the interplay of discount rate changes with the pension plan’s recent strong market performance.

As shown above, when it was still discounting its future benefit payments at an assumed return rate of 7.1 percent, the system had net liabilities of about $2.8 billion in FY 2020. A year later, following a 29 percent market gain, that liability has turned into a net surplus of $17.3 billion after applying a slightly lower discount rate of 6.95 percent. In fact, even if the discount rate were further reduced, to 5.95 percent, the financial statement shows NYSTRS would still have net positive assets of $1.8 billion. This would have required a further, unspecified increase in employer contributions—but it also would have injected more long-term stability into a system that ultimately leaves taxpayers on the hook for constitutionally guaranteed teacher retirement benefits.

Only one quarter of the $146 billion in NYSTRS financial assets as of June 30 consisted of relatively stable fixed-income assets, which have much lower upside for growth as well as less risk. The remaining money was invested in riskier, more volatile asset classes—including 55 percent in publicly traded stocks, and 21 percent in private equity, real estate and private loans, a class also known as alternative investments (DiNapoli’s NYSLRS allocation to alternative was even higher, at 24 percent as of 2021).

As noted in a recent Wall Street Journal article on public pension funds, alternative investments “carry potential pitfalls if the market should fall.” Continuing from the Journal:

Illiquid assets such as private equity typically lock up money for years or decades and are much more difficult to sell during downturns, heightening the risk of a cash emergency. Alternative assets have tripped up cities, counties and states in the past; Orange County [California] famously filed for bankruptcy in 1994 after losses of more than $1.7 billion on risky derivatives that went sour.

But recent history illustrates how what goes up can also go down—quite sharply. From 2005 to 2010, NYSTRS realized strong gains of 12 percent and 19 percent respectively, followed by losses of 6 percent and 20 percent during the Great Recession financial crisis, rebounding only partially with a 12 percent gain FY 2010. The average for the period was just 2.2 percent, forcing NYSTRS to raise its contribution rate over the next few years from 6.19 percent to a peak of 17.53 percent of base salaries.

In just the last five years, benefit payments to NYSTRS retirees have increased from $6.7 billion to $7.7 billion, and they will continue increasing, pushed by a combination of lengthening lifespans, rising inflation, higher salaries and more retirements. As shown by the table below, grabbed from the NYSTRS actuarial presentation, the average newly retired NYSTRS member in 2021 was 61.5 years old and began collecting pension payments after 26.3 years of service, with average maximum benefits averaging $49,145 a year based on final average salary of $91,713. 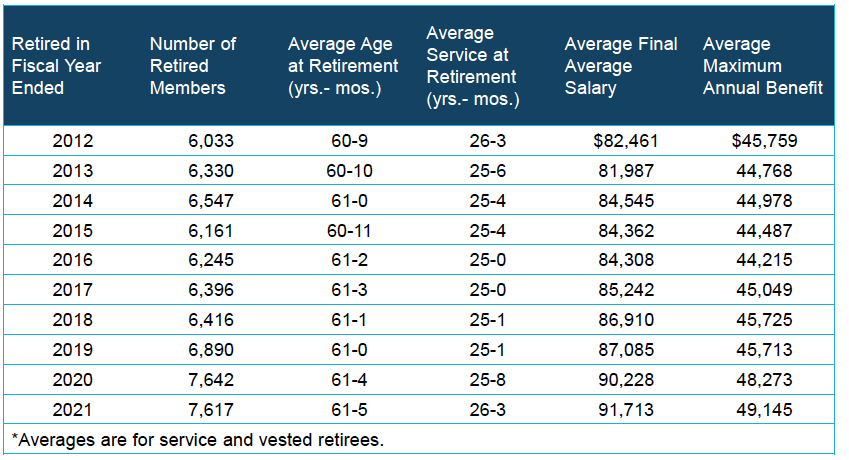 The numbers are higher, however, for those who actually work longer careers. As the Empire Center reported in its latest annual summary of public educators’ pensions, the 2,203 NYSTRS members who retired during the 2019-20 school year with at least 30 years of credited service time were eligible for a maximum annual benefit of $71,074—an all-time high. Average maximum benefits exceeded $91,000 a year for 30-year service members retiring from the very well-paying school districts of Long Island.