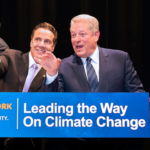 New York produced less electricity from renewable sources in 2018 than it did the year before despite significant intervention by state government.

Governor Andrew Cuomo’s Public Service Commission (PSC) in August 2016 ordered utilities and large electricity customers to subsidize new renewable projects by purchasing credits, with an eye toward having half the state’s electricity come from renewables by 2030. Cuomo has recently touted the policy as part of his version of a “Green New Deal,” and hiked the 2030 renewable target to 70 percent.

The PSC doesn’t calculate the total cost of its renewable mandate and utilities are prohibited from showing ratepayers the impact on their bills. But based on the number of RECs utilities must buy and the price at which they were being sold by the state Energy Research & Development Authority (NYSERDA), the mandate will cost about $50 million this year and rise to more than $100 million by 2021.

The New York Independent System Operator, which oversees the wholesale electricity market, detailed 2018 generation in its annual Power Trends report this month, and it calls into question what New Yorkers are getting for their generosity.

The data show renewable energy generators, including hydroelectric, wind, solar and others, together produced 35,808 gigawatt hours of electricity last year. That amounted to a 2.5 percent drop from 2017. All told, 26.4 percent of generation last year came from renewables, down from 28.0 percent the year before. The numbers don’t reflect the state’s efforts promoting behind-the-meter renewable, such as most solar panel deployments, which reduce demand for power from the grid and aren’t easily quantified. That said, New York customers used more electricity from the grid in 2018 than in 2016 or 2017.

As shown below, the state does not appear to be on the path to reaching Cuomo’s initial 50 percent goal, let alone his more recent 70 percent target. In fact, the state has yet to hit the 30-percent target state regulators set in 2010—hoping to hit it by 2015. 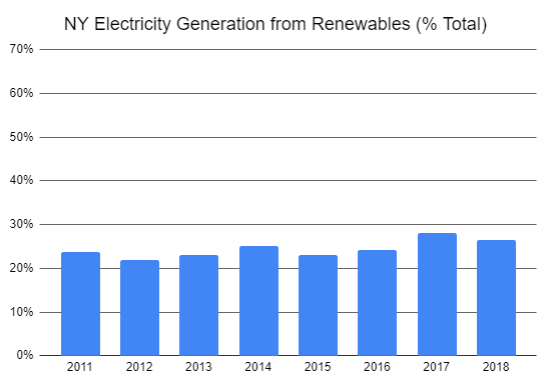 Most of the renewable energy came from the state Power Authority’s Niagara Falls and Massena dams, where annual outputs fluctuate based on weather factors and operational decisions. But when all hydroelectric power is excluded, it reveals less renewable energy (6,763 GWh) was sold on the grid in 2018 than in 2015 (7,064 GWh), before the Clean Energy Standard was adopted.

How could that be? For one thing, the electric grid hasn’t been able to deliver it. NYISO warned state regulators in 2010 that transmission would be an issue if the state wanted to promote wind development, and roughly 70 GWh of wind energy last year had to be “curtailed” because the grid couldn’t move it from its upstate source to where demand was higher.

Still other projects have been stuck on the drawing board because proposals to build solar panel and wind turbine depots in rural upstate regions have met local opposition. The state has taken the unconventional step of using state resources to help renewable-friendly local officials change municipal codes and smooth the way for private developers.

The state’s ham-handed approach to subsidies failed to initially account for the many smaller renewable generators getting state support under a Pataki-era program. One biomass generator went out of business at the end of 2017 because state officials couldn’t, in the interceding 16 months, fold them into the new subsidy regime.

Even when issues with transmission and existing facilities are worked out, the state faces additional headwinds.

New York’s program has relied on a pair of lucrative federal incentives that are now being phased out. Wind projects that break ground after December 31 will no longer be eligible for the Production Tax Credit (PTC), which pays owners a subsidy for each kilowatt-hour generated. The Investment Tax Credit (ITC) that benefits larger solar projects will pay out 30 percent of capital costs on projects built this year before unwinding down to 10 percent in 2021.

Meanwhile, close to two-thirds of the current wind energy capacity (1,162 MW of 1,739 MW) came online prior to 2009. Assuming a 20-year project life expectancy, some facilities will likely need to be replaced before 2030.

All told, New York’s renewable energy policies have never been poised for success.

First, the Cuomo administration has been more interested in tactics–such as building more renewables—than the actual goal of lowering carbon dioxide emissions.

And even that tactic was over-constrained: the PSC explicitly disqualified most hydroelectric power from state subsidies in no small part because it might make greater economic sense to finance a new dam in Quebec than to deploy solar panels in places like snowy Oswego County.

To cite one hypothetical alternative, if the state imposed a broad carbon tax, people and businesses (and perhaps even governments) would have found efficiencies and reduce emissions at the lowest cost. But Cuomo’s “Green New Deal” has never been about any sort of environmental outcomes. That became clear when the Cuomo administration last year took steps to steer construction work on renewable energy projects to building trade unions.

The anemic growth of land-based wind and other renewables will increase pressure on the administration to go big and further subsidize construction of larger wind turbines off Long Island. Unfortunately for ratepayers, offshore wind is the single most expensive type of renewable energy, and the Cuomo administration has already signaled most of the necessary billions will come from electricity customers north of New York City.