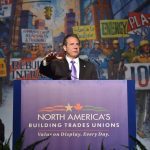 Governor Andrew Cuomo has married his unrealistic renewable energy targets to his push to steer work to the building trades unions. The likely results: even higher costs—and even fewer projects.

Last week, the governor announced that companies seeking the next round of state funds to build or install new solar panels, windmills and other renewable energy projects will have to pay the state’s “prevailing wage.” The purpose, Cuomo wrote in a press release, is “to further cement New York State’s commitment to creating high quality in-state clean energy jobs.”

In fact, as noted in this Empire Center study:

The phrase [prevailing wage] is both antiquated and misleading—since the pay levels mandated by the law are neither truly prevailing nor limited to wages, in the normal sense of either word. The law defines “prevailing” as the amounts set forth in union contracts covering at least 30 percent of workers in specialized building trades titles in a locality. And the mandated “wage” includes high-priced union fringe benefits, which can equal or even exceed a worker’s hourly cash pay.

The Labor Department’s union-favoring method for calculating the “wage” adds at least 13 percent to 25 percent to public building costs in New York, depending on the region in which the project is located.

The imposition of the prevailing wage requirement ultimately means fewer public works projects at higher costs—all to benefit the state’s building trade unions and union-shop employers, which rely on the wage mandate to steer public funds into their severely underfunded pension plans.

Requiring prevailing wage on renewable projects will mean the state must force electricity customers to pay more to make up for the increase in construction costs, fund fewer renewable projects, or a combination of both.

Cuomo made a similar move in 2013 by forcing upstate casinos to pay prevailing wage on their construction projects. In that instance, the governor went a step further and tried to make the casinos sign project labor agreements (PLAs) with the state Building Trades Council, which would have essentially prohibited non-union contractors from bidding. The PLA requirement was ultimately rejected by lawmakers, but Cuomo’s Friday press release said he plans to “explore” going beyond prevailing wage and possibly requiring PLAs. Like prevailing wage, forcing contractors to use a PLA also drives up costs.

This isn’t the first time Cuomo has undercut his own goal of having half the state’s electricity come from renewables by 2030, also known as 50-by-30.

The Cuomo-controlled Public Service Commission in 2016 disqualified most hydroelectric projects from competing for the newest rounds of state subsidies. That’s left the state relying chiefly on solar panels and wind turbines to replace upward of a third of the electricity now generated from fossil fuels or nuclear energy. Both wind and solar are more intermittent than hydroelectric power, and wind projects have met stiff local resistance.

And Cuomo in January proposed letting the state Power Authority build new renewable projects. The prospect of a state entity cannonballing into the limited pool of available subsidies has likely spooked potential investors already leery of lengthy approval processes. The move came after the PSC had twice slashed the renewable energy credit (REC) purchases that utilities and large electricity customers must make to fund new renewables.

Making renewable energy companies pay prevailing wage will win Cuomo accolades from politically influential unions in the months leading up to the 2018 gubernatorial election. But it also ends any illusions that the governor was ever serious about reaching his ballyhooed 50-by-30 goal.