From Comptroller Thomas DiNapoli’s new report on the financial meltdown’s economic impact on New York, there’s this chart comparing the drop in Wall Street jobs during the “current downturn” (dated back to the summer of 2007) to losses following the crash of 1987 and the “Dot-Com and 9/11” decline beginning in 2001: 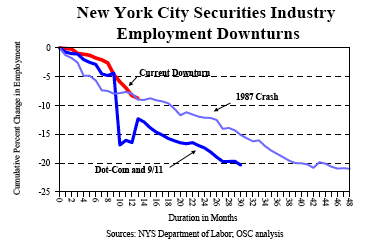 So far, the trend is closely following the 1987 track, during which securities industry employment took four years to hit bottom.   But this chart, and others like it, may actually understate the problem. This is not just another “downturn” but a massive upheaval in a sector whose business model is, basically, broken.   The financial sector that emerges from the ashes will be far leaner and more heavily regulated than Wall Street used to be.   Beyond the budget cuts needed to close next year’s gap, both the state and city budgets must be fundamentally restructured to reflect this new economic reality.

Another key finding of the comptroller’s report: Hedge funds and private equity firms are the strongest remaining players in New York’s securities industry.  It’s vitally important for New York to hold onto these businesses in the years ahead, obviously.  But state officials need to recognize that the largest and most profitable of these firms tend to be small, employing just 100 people on average.   The typical investment boutique is far more nimble and mobile than a big old-fashioned investment bank.   Small hedge funds and private equity firms will find it easier to pick up stakes in search of friendlier business climates if the state and city respond to the budget crisis by hammering investment managers with income tax increases.