New York’s elementary and secondary students would be performing twice as well as their counterparts around the nation if education spending were the sole determinant of student achievement. But it’s not. So a proposed $2.1 billion hike in state education aid in Governor Hochul’s executive budget– a seven percent increase over the current year —would increase that disparity in spending, with no real plan for improving results.

In 2018-19, the most recent year for which final comparative data is available, New York spent $25,139 per pupil, more than any other state and nearly twice the national average of $13,187. New York City schools spent $28,004 per student, easily the most among the nation’s major city school districts.[i] 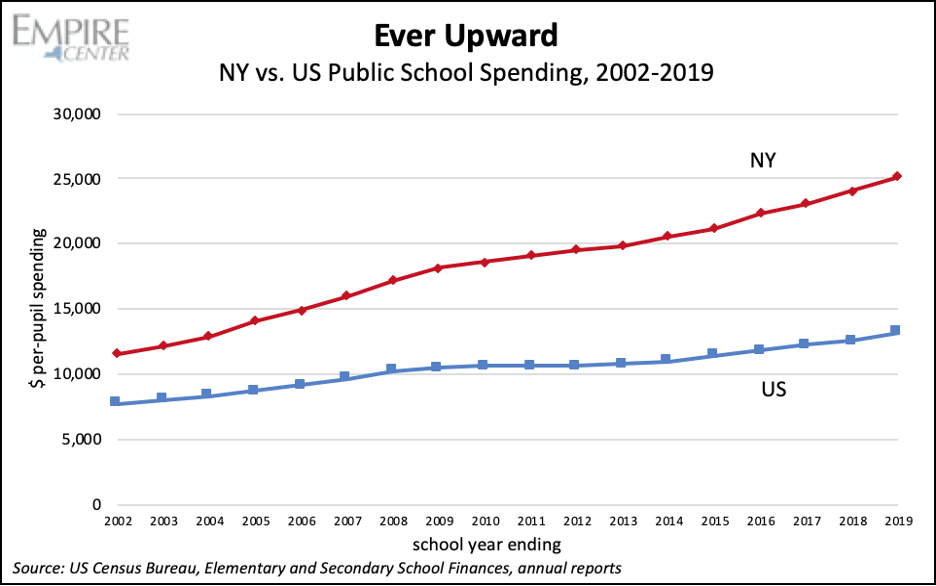 Yet educational achievement in New York is barely middling, as measured by scores on the U.S. Department of Education’s National Assessment of Education Progress (NAEP, aka the Nation’s Report Card). Most striking is that, even as New York continued to elevate its spending relative to its peers during the past two decades, its relative performance declined.

New York’s per-pupil expenditure is poised to rise further. According to the State Comptroller’s dashboard, the state’s schools as of November 30, 2021 had spent only about $1 billion of the $14 billion in direct federal emergency aid made available to them under the Coronavirus Response and Relief Supplemental Appropriations Act and the American Rescue Plan, with those funds available for obligation until 2024 and 2025, respectively.[iii]

Also, a historic multi-year increase in state operating aid (aka Foundation Aid) is newly underway, with a $1.4 billion hike for the current year enacted in last year’s budget. Under Governor Hochul’s budget, Foundation Aid will stairstep higher over each of the next two years, starting with an increase of $1.6 billion, or 8.1 percent, for the upcoming year. Under her budget, schools would also get a $500 million increase in non-Foundation Aid education spending.

The enrollment declines and the increase in other sources of aid help to explain why per-pupil spending continues to rise despite the success of the tax cap in place outside New York City since 2012 that limits tax levy increases to the lesser of 2 percent, or the rate of inflation.

Much energy is spent debating the questionable way state aid is allocated among school districts under the Foundation Aid formula. But it’s easy to miss the forest for the trees. The Empire center publishes a School Budget Spotlight each year allowing residents to compare school district funding in locales across the state.[v] Even in the region of the state that spends the least per student, the Mohawk Valley, schools spend more per pupil than the average in any other state.

Since spending in New York is so high relative to other states – and since the correlation between additional spending and improved performance is (at best) unproven— New York should pursue alternative means of improving student achievement.

If we want better student performance, we could try holding teachers and schools more accountable for delivering it. That can be done at the teacher level, the school level or both.

In every profession, there are poor performers and those who engage in misconduct. But those public school teachers in New York who do so are insulated by special procedural protections that others do not enjoy. Under State Education Law 3020-a, school districts can’t terminate teachers without a hearing that shows “just cause” for removal. A 2018 survey conducted by the New York State School Boards Association (NYSSBA) found that the process is so time-consuming and expensive for districts that one-third of them do not pursue disciplinary action even when they believe it’s warranted.[vi] One need look no further than the notorious ”rubber rooms” in New York City for the waste of taxpayer dollars and the virtual cuffs on school administrators that prevent their making changes.

Schools can also be held more accountable. A good illustration is New York’s charter schools, which are held to greater accountability in exchange for greater operational autonomy. The schools use their flexibility to implement innovative curricula or teaching methods.

Operating under New York State’s 1998 charter school law, these schools must have their charter application approved by one of the state’s authorizing entities before they can be issued a charter by the Board of Regents. Both the authorizing entity and the Regents then exercise ongoing oversight over the school. The authorizers can close the schools, and the charters must be renewed periodically for the school to continue operating. Public charter schools are funded through tax dollars, but often at a significantly reduced cost per pupil from traditional public schools.

New York City charter school students in grades 3 through 8 outperform their peers on academic proficiency exams, significantly exceeding state and school district proficiency rates in both math and English Language Arts (ELA). The superior performance of charter schools is seen among economically disadvantaged students, Black students and Hispanic students.[ix] Not surprisingly, most of the top-performing elementary schools in the city are charters.[x]

Fortunately, significant research exists on this question. A 2018 survey of that research done by Marcus Winters of the Manhattan Institute assessed seven major studies of New York City charter schools. Five used a randomized design to compare educational achievement gains of students randomly offered a charter seat at a specific school with those randomly denied a seat. The other two “matching” studies compare the achievement gains over time of traditional and charter students with similar characteristics at schools across the city. The estimated effect of attending a charter was consistently positive across the studies, with an overall larger effect in math than in ELA.[xi]

The matching studies Winters cites were conducted by Stanford University’s Center for Research on Education Outcomes (CREDO), which has studied the performance of charters in states around the country. CREDO conducted a pair of longitudinal studies of student achievement gains in New York’s charter schools, issued in 2013 and 2017. These studies matched student records to hold constant for prior test scores, race/ethnicity, free/reduced lunch status, special education status and more.[xiii]

CREDO assesses the performance of charters in states around the country. In some cases, these studies do not always find strong evidence of positive impact. But the results of the two CREDO studies concerning the overall impact on educational achievement of New York’s charter school sector are relatively consistent — and consistently positive. The 2017 study found that, compared with the neighborhood public school, charter students gained the equivalent of 34 additional days of learning in reading and 63 additional days in math during a school year.[xiv]

Unfortunately, access to these schools is limited. According to the New York City Charter School Center, there were 81,000 applicants for 33,000 open seats in New York City charter schools for the 2019-20 academic year.[xv] That included three applicants for every available seat in the Bronx — the borough where charter school students most outperform their peers in traditional schools on achievement tests. In 2018-2019, charter school students in the Bronx were twice as likely to demonstrate proficiency in math.[xvi]

But the number of charter seats in the Bronx and the rest of New York City is capped by an arbitrary statutory lid that currently prevents new charter schools from opening.

This cap has been raised in the past, and it makes sense to raise it again now—or remove it entirely — to serve the growing demand for charter seats that is currently preventing the parents of 48,000 kids in New York City from exercising the charter option.

It’s laudable that charter schools in the Governor’s budget receive the formula funding increase that they have been denied at times in the past. But the state’s charter schools continue to operate and achieve better results at a lower cost than the traditional public schools.

That’s just one more reason to raise or remove the cap now.

[v] The most recent School Budget Spotlight is available at https://www.empirecenter.org/publications/school-budget-spotlight-2021-22/