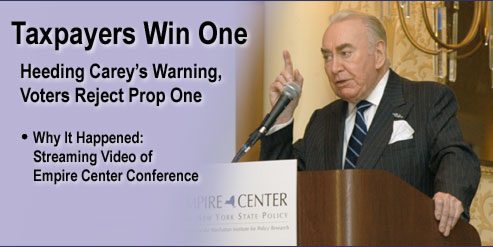 A proposed state constitutional amendment that would shift budget-making power to Albany’s legislative leaders went down to a resounding defeat at the polls on Nov. 8.

The Empire Center for Public Policy played a leading role in sounding the alarm over the budget-busting implications of the amendment, which was Proposal One on the Nov 8 ballot. The anti-Prop One campaign kicked into high gear after an Empire Center luncheon forum on September 20, where the keynoter was former Gov. Hugh L. Carey and other distinguished speakers included former Mayor Edward I. Koch. The event titled, “Breaking the Budget in New York State: What’s at Stake in November’s Referendum” was held at the Grand Hyatt Hotel in New York City and was attended by leading fiscal experts, business leaders and reporters.

Carey noted that the change has been called a “power grab” by state legislators. “Well,” he added, “I’d amend that. It’s a power grab and a purse grab.”

The former governor — a Democrat widely credited with holding down spending and reducing taxes and debt during his tenure — said passage of the proposed amendment would deprive future governors of the power they need to deal with any fiscal crisis like the one he encountered upon taking office in 1975.

Hearkening back to the state promotional slogan invented by his administration, Carey concluded: “For God’s sake, if you love New York, don’t let Prop One become law.”

Former Mayor Edward I. Koch, another speaker at the Empire Center forum, also was critical of the amendment.

Although New York City representatives make up the largehst single bloc of state legislators, Koch said that giving the Legislature more power in budget-making would not be good for the city.

As mayor, Koch said, “I knew if there was one person who would be defending the state of New York and all of the localities in the state it was the governor. So to deprive [the governor] of a power which he currently has … and give it to the state Legislature, would be nuts.”

Other panelists at the forum included:

Peter Goldmark, budget director under Carey in 1975, who called the amendment “profoundly irresponsible.”

“It is reckless and destructive, and flies not only in the face of common sense, but in the face of our own history.” said Goldmark, who now is program director for the Environmental Defense Fund.

“I think that placing executive budgeting with legislative budgeting is a mistake, and certainly a mistake in the state of New York,” said Forsythe, a distinguished lecturer at Baruch College.

Diana Fortuna, president of the Citizens Budget Commission, predicted the amendment would not result in timely adoption of the annual state budget, despite supporters’ claims to the contrary.

“The proposal that will be touted in everybody’s mailbox from their state legislators over the coming weeks as ending late state budgets in fact makes significant changes to the budget process only after the deadline is missed,” she said. “So you could say it only gets serious about change after the budget is late, and then it gets serious in a way that is destructive.”

John S. Dyson, a former state Power Authority chairman who also served as both state commerce commissioner and commissioner of agriculture and markets under Carey, warned the Legislature could not responsibly exercise significantly greater budgeting power.

“The Legislature would be completely incapable, in my experience in working with them for thirty years, in putting together a budget,” said Dyson, now chairman of a private investment firm.

Taking a Longer View on Our Local Budgets

The Cost of Their Intentions: An Analysis of the Mayoral Candidates’ Spending Proposals

Blueprint for a Better Budget