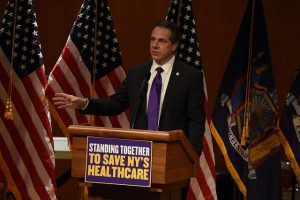 There are plenty of reasons for New Yorkers to be leery of the House Republican health plan, but Governor Andrew Cuomo’s gestures of resistance on Monday raise several objections.

Cuomo announced that the Department of Financial Services will be issuing emergency regulations to ban health plans from discriminating based on pre-existing conditions, age, or gender and to mandate continued coverage of all Essential Health Benefits under President Barack Obama’s Affordable Care Act.

He further declared that insurers who withdraw from New York’s Obamacare exchange would be banned from contracting with Medicaid, Child Health Plus, and other state-funded programs.

The regulatory actions appear procedurally questionable, unlikely to have any real impact in the short term, and possibly counterproductive in the long term. The contracting policy raises fairness questions and could have unintended side effects.

According to the state’s rule-making manual, agencies can impose regulations on an emergency basis – without a comment period or public hearing – under two conditions:  a) when “immediate adoption of a rule is necessary for the preservation of the public health, safety, or general welfare” and b) when following the usual procedure would be “contrary to the public interest.”

Emergency rules must be replaced by fully vetted rules after 90 days.

In this case, the supposed threat to New Yorkers is federal legislation that is still being debated in Congress. Even if it passes the Senate, it wouldn’t take effect until next year at the earliest. That leaves plenty of time to follow full-fledged rule-making procedures.

The proposed rules would apply to only a fraction of New Yorkers.

Most large-employer health plans are exempt from state regulation under federal law.

Also unaffected would be government-operated health plans such Medicare, Medicaid, and Child Health Plus.

Cuomo’s proposals would apply only to health plans sold to small groups (100 employees or less) and to individuals, representing perhaps half of the subset of the population with commercial coverage.

Some of the protections are already codified in state law.

Cuomo’s announcement said the proposed rules would mandate that health plans “do not discriminate against New Yorkers with preexisting conditions or based on age or gender.”

A state law enacted in 1992 – under Governor Mario Cuomo – bars insurance companies from refusing coverage to people with pre-existing conditions. The law also requires plans to charge premiums without regard to age or health condition.

It’s unclear how the proposed regulations would expand on those protections.

Cuomo’s proposed rules would also require small-group and individual health plans to cover all Essential Health Benefits as defined in the Affordable Care Act. That requirement, too, is already codified by state law.

The House GOP health plan, if passed, would keep Essential Health Benefits in place, but allow states to seek waivers from some of them. It’s far from clear that New York would ever seek such a waiver. When and if a future governor chose to do so, Cuomo’s executive actions would present no real obstacle. A future governor could repeal the regulations just as easily as he is imposing them.

The proposed contracting policy raises fairness questions, and could be counterproductive.

The governor said health plans that withdraw from the state Obamacare exchange, known as the New York State of Health, will be banned from doing business with other state programs, such as Medicaid and Child Health Plus.

However, his announcement made no mention of plans that previously quit the exchange, or that never participated to begin with. Would they, too, be banned from handling Medicaid and CHP? If not, why not?

Nevada state officials have taken a more carrot-oriented approach, notifying plans in advance that their bids for Medicaid contracts would be more likely to be accepted if they also sold coverage on Nevada’s ACA exchange.

As Politico’s Dan Goldberg points out ($), there are counties in the state where no more than two plans offer Medicaid managed care. If Cuomo’s ban drives too many insurers out of the program, Medicaid recipients in those areas could run out of choices.

If the House GOP plan does become law, some of the proposed rules would make things worse for New Yorkers.

But that’s not true under New York’s current ban on age-rating. Unless the state modifies that rule, the new federal tax credits would shortchange younger New Yorkers while providing a relative windfall for older ones.

The House bill would also prohibit using federal tax credits to buy any health plan that covers abortion. Under Cuomo’s rules, all regulated health plans must cover abortion (with limited exceptions for religious organizations), which would severely restrict the options of New York consumers.