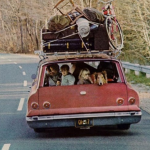 When motorists in New York top off their gas tanks this Labor Day weekend, they’ll be paying an average of about 45 cents per gallon in state and local fuel taxes—the 5th highest total in the nation, and second highest in the Northeast.

Detailed breakdowns of gasoline taxes across the country can be found here, courtesy of the American Petroleum Institute, as also mapped here by the Tax Foundation.

While a number of states have significantly boosted their gas taxes in recent years, New York’s total fuel tax burden has ranked at or near the top of national rankings for a long time, thanks to increases enacted in the early 1990s for the express purpose of funding highway and bridge improvements.

But the lock on New York’s dedicated transportation fund has been broken for more than 20 years, violating what the Tax Foundation has described as the “benefits principle” justifying most state fuel taxes. This blog post ends by suggesting a new revenue-raising paradigm to bolster the equity and adequacy of funding for the state highway system.

The state collects an additional total of nearly 25 cents per gallon from the Motor Fuel Tax (MFT), long pegged at 8 cents plus a more recent .05 cent per gallon “petroleum testing fee,” and the Petroleum Business Tax (PBT), currently set at 16.9 cents per gallon.

The PBT is linked to the 12-month average producer price index for refined petroleum products, and annual increases or decreases in the tax rate are further limited by law to 5 percent. The current rate is an increase of 0.7 cents over last year—but still a penny-and-a-half below the 18.4 cents-per-gallon rate as of 2014, which pushed the total tax in New York to nearly 50 cents per gallon.

Unlike sales taxes, net receipts from the PBT and MFT are deposited in special funds dedicated solely to transportation purposes—but not just for roads.

Of the $1.6 billion in PBT and MFT receipts collected by the state last year, $1 billion went to the Dedicated Highway and Bridge Trust Fund (more on this below). Another $610 million went to separate dedicated state funds benefiting mass transit, including $494 million for the Metropolitan Transportation Authority (MTA).

In other words, out of every dollar in state taxes paid on gasoline sold anywhere in New York State, roughly 30 cents flows to New York City subways and buses, along with Metro North and the Long Island Railroad.

Based on federal estimates of average annual fuel use, a typical New York driver pays $122 a year in state gas taxes (the PBT plus MFT, excluding sales tax), in addition to sales taxes. Out of those state taxes, $76 goes to the Dedicated Highway and Bridge Trust Fund. The remaining $45 goes to transit, including roughly $40 for the MTA and $5 for transit systems in other areas of the state.

The Dedicated Highway and Bridge Trust Fund, also known as the DHBTF, was created in 1991 to provide recurring support for pay-as-you-go (non-debt) financing of highway and bridge capital improvement needs. The principal source of revenue for the new trust fund was a much-expanded PBT, supplemented by motor vehicle fees, the highway use tax and a portion of some other transportation-related state taxes. Last but not least, the dedicated fund has also received significant but varying transfers from the state budget general fund.

The creation of the DHBTF achieved the “locked box” revenue stream long sought by advocates of improved highway capital funding, but was undermined within two years of the dedicated fund’s creation, when the law was amended to permit the use of dedicated revenues to cover debt service on “service contract” bonds issued by the Thruway Authority for general transportation purposes.

By the time Governor George Pataki left office in 2006, barely a quarter of the dedicated fund was going directly to capital construction. The rest was divided between debt service payments and the operating expenses of the Department of Transportation and the Department of Motor Vehicles.

As shown in the pie chart below, under budgets enacted during Governor Andrew Cuomo’s first two terms, barely 23 percent of the DHBTF spending has gone to pay-go spending on capital projects. The remainder has been split almost evenly between debt service and state operations expenses. 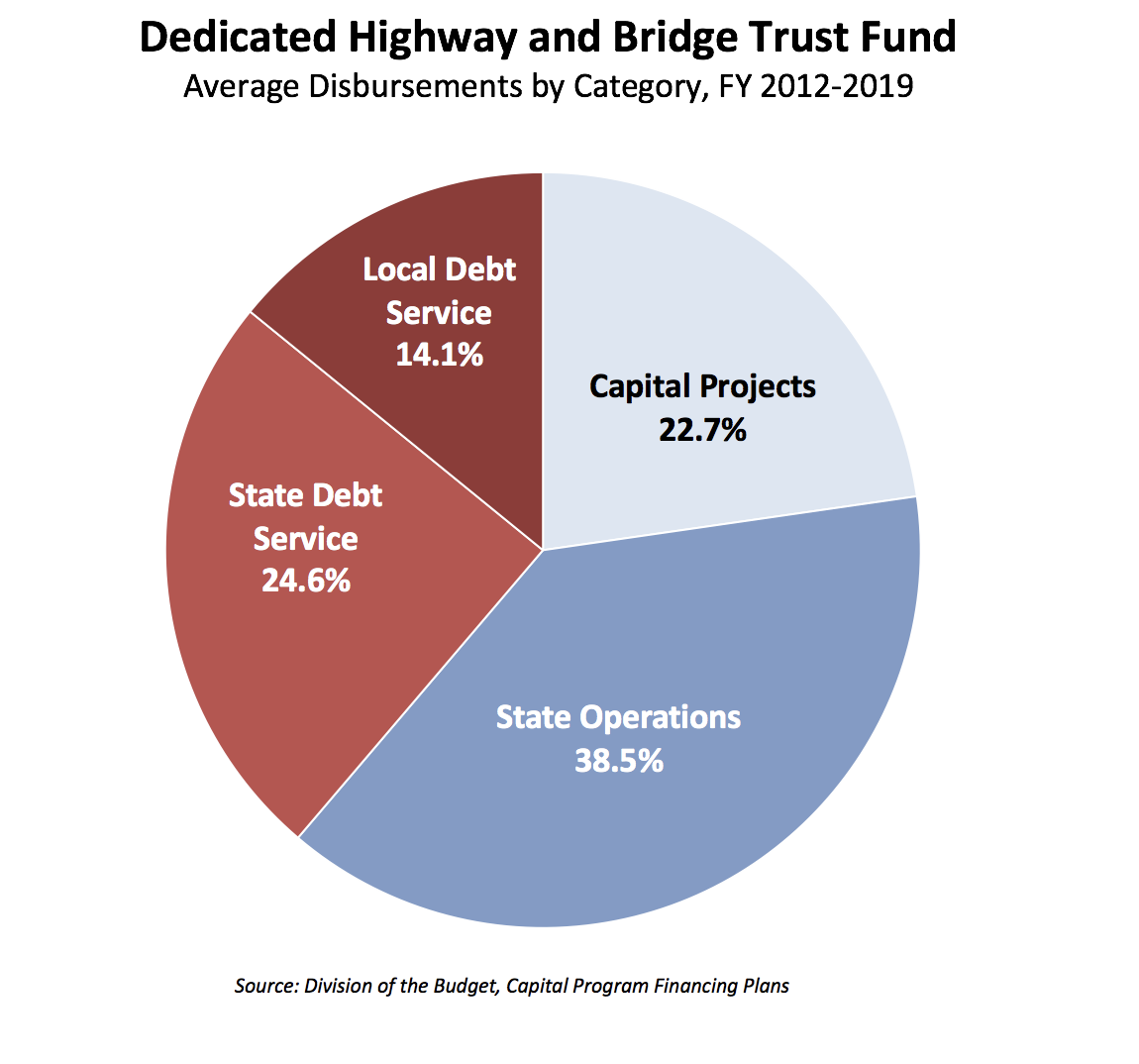 Little change in that spending pattern is projected in coming years. The chart below illustrates the trend in actual and projected DHBTF spending from FY 2011, the last budget enacted under Governor David Paterson, through FY 2023, the last year of Governor Andrew Cuomo’s latest financial plan. 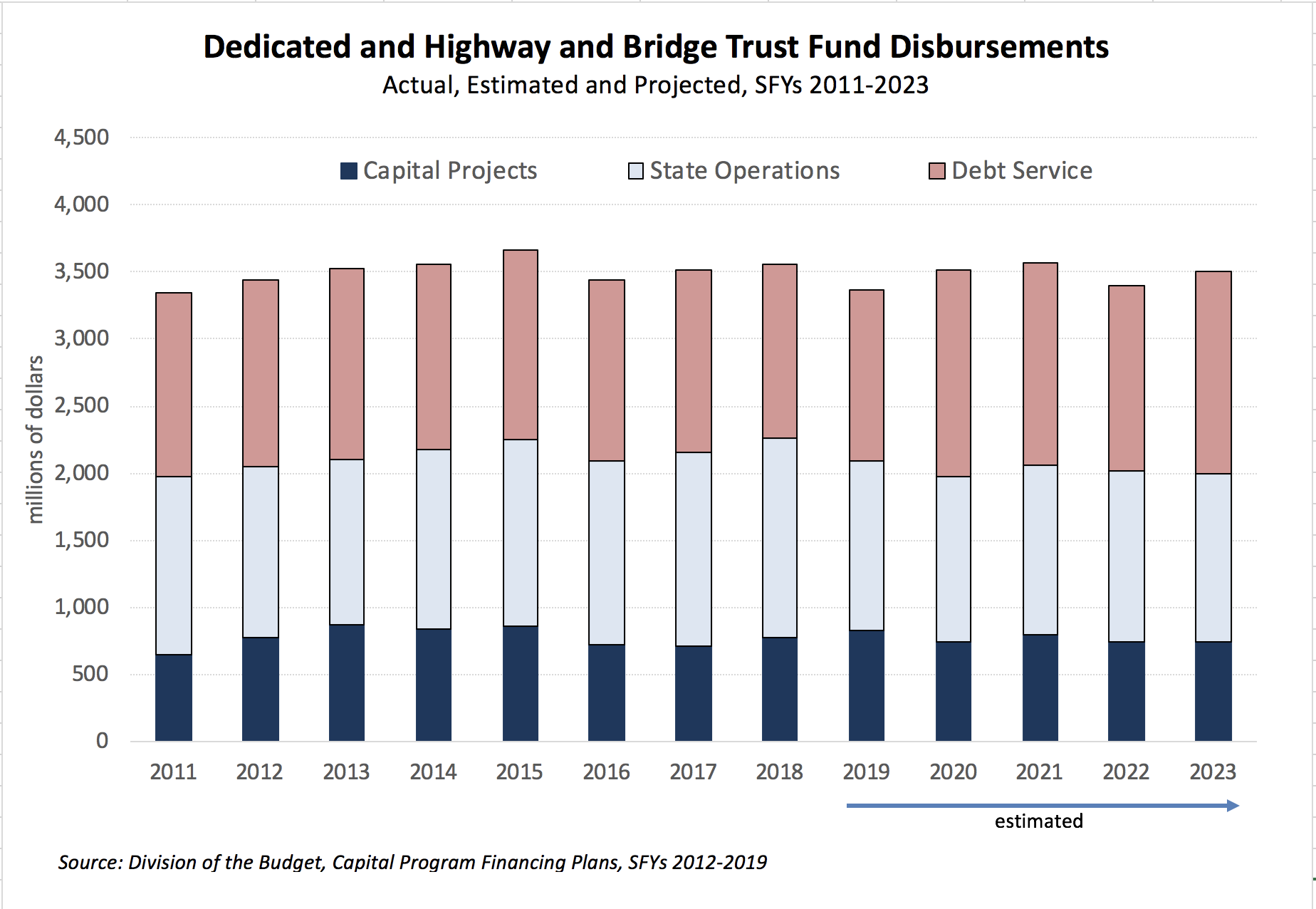 This situation was not created by the current governor—but it’s certainly not improving, either.

The state comptroller’s office repeatedly has documented the shortcomings of the Dedicated Highway and Bridge Trust Fund. In a February 2014 report, the comptroller said:

The [dedicated fund] is a cautionary tale about a missed opportunity for effective capital planning and funding. Originally conceived to provide a dedicated stream of revenues for investments in New York’s transportation future, the Fund now is primarily devoted to repaying past years’ borrowing and supporting current operating expenses, no longer fulfilling its original mission. The increasing need for General Fund subsidies to support the Fund reduces the availability of such resources elsewhere in the Budget.

The ultimate problem with the DHBTF isn’t just the extent to which funds have been leveraged by debt, but its reliance on a dwindling base of fuel taxes as a source of revenue. Thanks to improvements in fuel efficiency and slower-than-average growth in population, gasoline consumption in New York has barely budged in nearly 50 years, as illustrated by the chart below. This means the only way to raise more money from gas taxes is to raise tax rates—understandably an unpopular and difficult step in what’s already among the nation’s highest-taxed states. 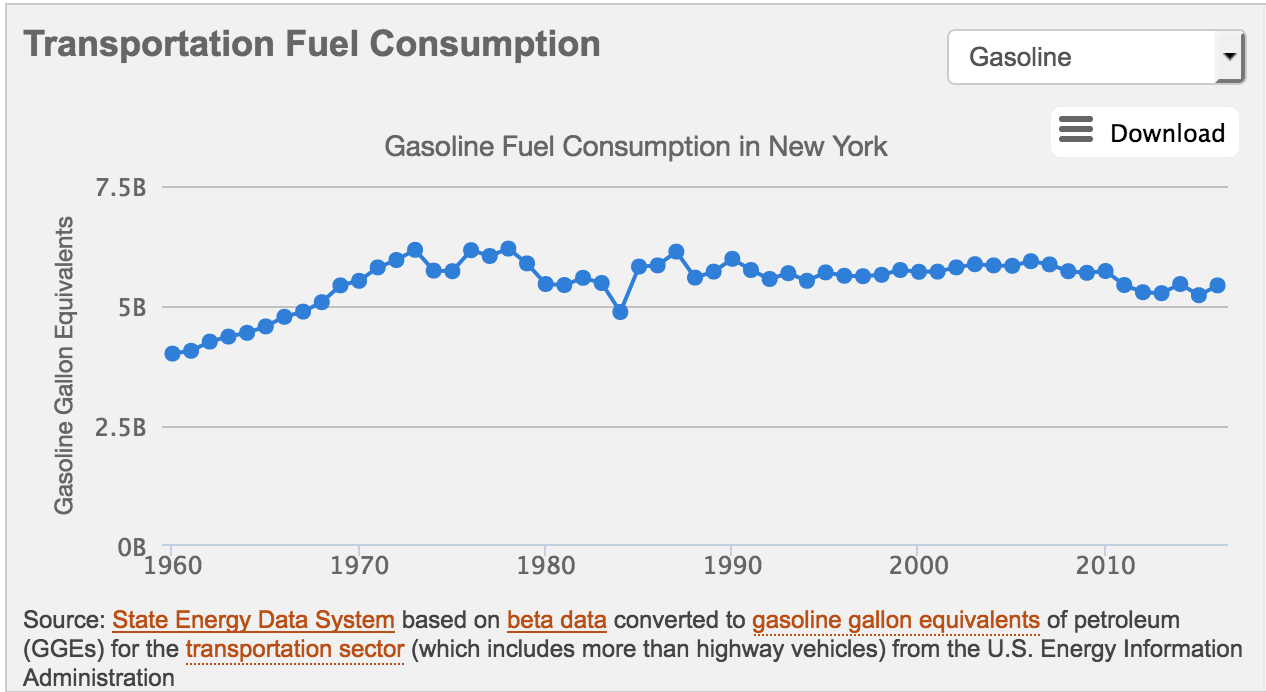 Meanwhile, even as motorists statewide continue to generate close to a half-billion dollars a year for the MTA, a traffic advisory panel appointed by Governor Cuomo has recommended a plan to ease traffic and raise more transit money through “congestion pricing” of vehicular traffic. It would impose a surcharge of up to $11.52 on cars driving into the most crowded areas of Manhattan, add tolls to the city’s East River bridges—and, in the process, generate $810 million to $1.1 billion a year for subway fixes.

There’s no denying that traffic congestion is a serious and worsening problem in Manhattan—and that the MTA’s massive capital plan, while largely misspent over the years, is going to need still more money in years to come.

But if state officials are going to seriously consider imposing heavy new toll burdens on Manhattan-bound drivers, they should simultaneously reconsider the inadequacy and inequity of the current fuel tax structure. One politically tenable solution would be to go ahead and impose congestion pricing—but, at the same, rededicate 100 percent of state fuel taxes to highway and road repairs.

This would come close to supporting recurrent pay-as-you-go financing of the $578 million in annual local highway assistance that the state now borrows every year. Pay-go financing gradually reduces the “local” debt service drain on the dedicated fund, freeing more money for more capital improvements to the highway system.

This would be a start—but more would be needed. Given the prospect of continued drops in gasoline consumption, plus continuing untaxed fuel sales on upstate Indian reservations, the state needs to plan an expansion of user fees derived from passive automated tolling—not just on the Thruway system, but on other bridges and limited access highways. Efficient road-pricing could also unlock the potential for public-private infrastructure partnerships, a source of technological innovation (and, with proper safeguards, financing) still untapped in New York.

Schumer taps his own state