Fifty-seven of New York’s 62 counties lost more residents to other parts of the state or the nation than they gained between 2010 and 2012, according to newly released U.S. Census estimates. Eleven of those counties might be described as demographically dying: they not only had more people move out than in, but they recorded more deaths than births.

During the same period, a total of 224,468 more residents moved out of New York than moved in from other states, by far the nation’s largest net domestic migration loss. This builds on a long-term trend. Measured as a percentage of 2010 population, New York’s net domestic out-migration rate of 1.16 percent between 2010 and 2012 was fourth highest of any state’s, after Rhode Island (1.26 percent), Illinois (1.22 percent) and New Jersey (1.16 percent). Thanks to an influx of foreign immigrants and a net surplus of births over deaths, New York State’s total population grew by 192,157, or about 1 percent, while the nation’s estimated population was growing 1.7 percent during the period.

Here’s a list of domestic migration changes for New York counties, ranked starting with counties that lost the most. The counties highlighted in yellow also had more deaths than births. 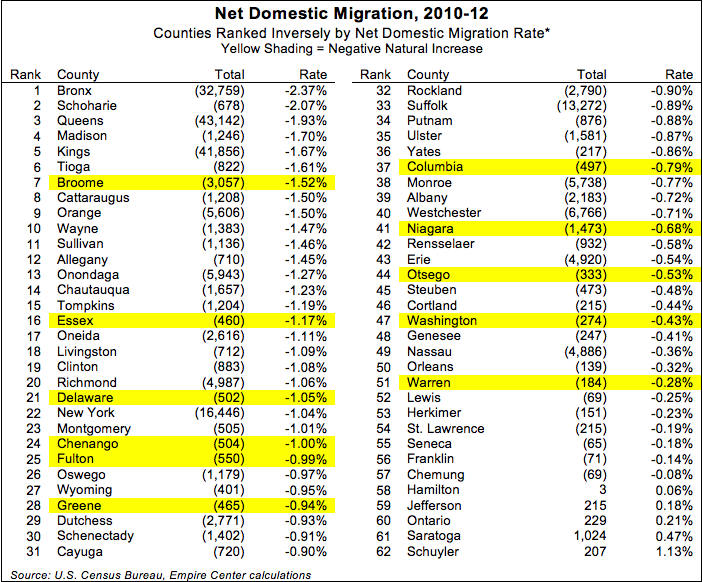 Ten of the counties on the list gained enough foreign immigrants to achieve a net positive migration, counting both foreign and domestic moves. Those counties included three of five New York City boroughs, excluding only the Bronx and Staten Island (Richmond County), as well as the counties of Albany, Erie, Franklin, Nassau, Rockland, Tompkins and Westchester.

Some of the biggest net migration losers include Schoharie, Sullivan, Broome, Orange and Greene counties, all of which sustained major damage from Hurricane Irene in the fall of 2011. But some of these counties — most notably Orange — also have a healthy excess of births over deaths.

The table below shows total population change by New York county between 2010 and 2012. Thirty-five counties lost population; the biggest losers, in percentage terms, were flood-ravaged Schoharie and Delaware counties, while the biggest gainers were Kings (the borough of Brooklyn) and Jefferson. 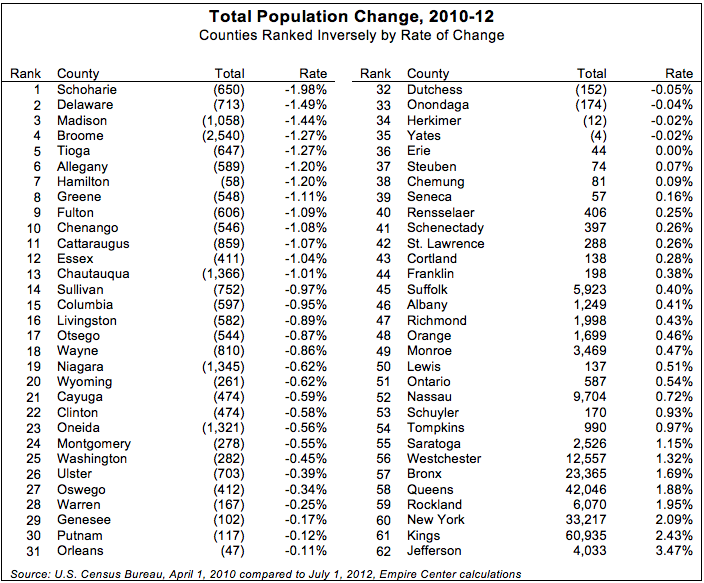