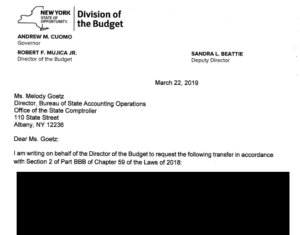 Is the Cuomo administration disclosing its payouts from the $2 billion Health Care Transformation Fund as required by law? You be the judge.

Linked below are copies of records provided to the Empire Center in response to a Freedom of Information Law request filed more than two months ago, on June 14, including:

The materials reveal nothing beyond the few facts that were already on the public record, and appear to fall short of the minimal reporting requirements spelled out in the fund’s enabling statute.

The disclosed materials confirm a $555 million transfer to the General Fund that was previously shown in the comptroller’s monthly cash basis report. However, they give no insight into how that money is being spent beyond vague categories already published in the state’s financial plan, such as “housing rental subsidies,” “state-only Medicaid payments” and “capital projects.”

Oddly, the records do not reflect the one fund disbursement that the Cuomo administration had publicly announced – in support of Medicaid rate hikes for hospitals and nursing homes.

The Health Care Transformation Fund was created as part of the 2018-19 budget as a repository for $2 billion in proceeds from the sale of Fidelis Care to Centene Corp., which the companies agreed to pay to the state in return from approval of their $3.75 billion deal by the departments of health and financial services.

The budget language empowers the governor, through his budget director, to spend the Fidelis money on virtually any health-related purpose without further legislative approval – a remarkable degree of latitude, given the large sum involved.

The reporting requirements were relatively weak: Within 15 days after each expenditure, the Cuomo administration is supposed to notify the Legislature of the amount, date, purpose and “methodology used to distribute the moneys.” The administration is also mandated to provide lawmakers with quarterly updates that itemize receipts and disbursements.

The records provided to the Empire Center include no 15-day notices to the Legislature – nor any other documentation of amounts, dates, purposes or distribution methodologies for individual expenditures. The page-long summaries of fund activities printed in the financial plan updates could be construed as quarterly reports – but they do not include a full itemization of disbursements.

The most recent summary indicates, for example, that $155 million was spent on “capital projects” in fiscal year 2018-19, but says nothing about how the money was used or who received it.

Notably missing from the recent versions of this summary are the Medicaid rate hikes for hospitals and nursing homes that the Cuomo administration announced in October 2018. Officials confirmed at the time that the rate hikes would be paid for out of the Health Care Transformation Fund, and financial plans from November and January showed the fund spending $500 million over three years on “transitional operational support for health care providers.”

However, that line item disappeared from the financial plan update in February, when Governor Cuomo declared that he was canceling the rate hike as part of a plan to balance the state budget. He later withdrew that plan, but the money did not reappear in Health Care Transformation Fund summaries released in May and August.

Another discrepancy relates to the timing of the original $1 billion transfer from Fidelis. The screen grab from the Budget Division shows it being deposited on Aug. 30, 2018, but the comptroller’s cash report indicates that it was paid sometime in July.

So when did the $1 billion really arrive? More importantly, how is the Cuomo administration spending that money and why won’t it share more details? Is the rate hike for hospitals and nursing homes – a big election-year win for politically influential interest groups – going forward? If so, how much will it cost? For now, the public can only wonder.