Any plan to reduce or eliminate what local governments pay into New York’s Medicaid budget would inevitably create winners and losers. The Assembly Republicans’ version, unveiled last month, is no exception.

Assembly Minority Leader Brian Kolb and his members are proposing to phase out Medicaid contributions by county governments over the next 10 years while cutting New York City’s contribution in half over the next 20 years.

Likely to come out ahead under this scenario are the taxpayers in the five boroughs and most upstate counties, because their savings on local Medicaid costs would outstrip their share of the expense shifted to state government.

Likely to come out behind are residents of Long Island and the downstate suburbs, where Medicaid costs are relatively low and state tax payments are relatively high. Also clear losers would be commuters who work in New York but live out-of-state—since they pay no local taxes here but account for about 15 percent of state revenues.

The rough numbers are shown in the chart below. It’s based on local Medicaid costs provided by the Association of Counties, and a regional breakdown of 2010-11 state revenues from the Rockefeller Institute of Government. 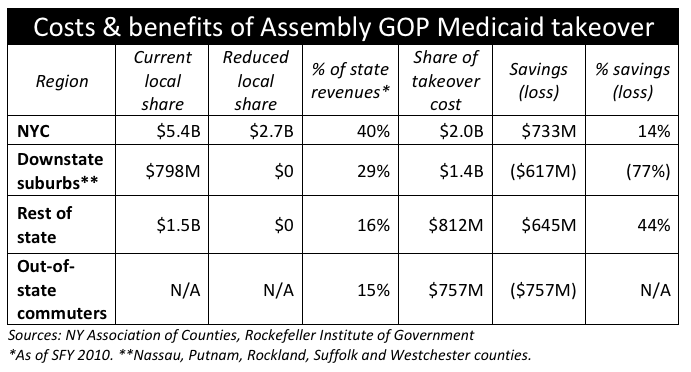 Some other states require local governments to pay a small part of Medicaid costs, but the cost shift by New York is bigger than those of all other states combined. For most counties, Medicaid is the single largest budget expense—and often exceeds their entire revenue from property taxes.

Governor Mario Cuomo first proposed to phase out the county contribution in 1994—with the catch that counties would have had to give up a share of sales tax revenue in trade.

Last year, U.S. Representatives John Faso (R-Kinderhook) and Chris Collins (R-Clarence) cosponsored federal legislation requiring New York to eliminate Medicaid contributions for all counties outside New York City. The proposal was also included as an amendment to various bills intended to repeal and replace the Affordable Care Act, none of which ultimately passed.

The winners and losers of that plan—analyzed here, here and here—were significantly different because it omitted New York City from the takeover. All counties outside the city stood to save money under that version, while New York City would have paid substantially more.

Backers say they would finance the Medicaid takeover and other expenses by cutting costs elsewhere, including a 50% reduction in the film and TV production tax credit and elimination of the property tax rebate checks.

However, those ideas are not included in the proposed legislation, would not cover the full cost of the proposed expenditures and could be implemented with or without a Medicaid takeover. They are not factored into the cost-benefit analysis above, which looks at the impact of the takeover standing alone.