This week’s announcement that Micron Technologies will build a computer-chip plant in Onondaga County comes with an important condition that will deliberately hike the price tag — and steer work to New York’s politically wired construction unions.

The project is getting, among other things, up to $5.5 billion from Albany’s “Green CHIPS” program, which requires construction projects to comply with federal prevailing wage rules. Micron appears also poised to receive federal CHIPS funds, which would separately force Micron’s site developer pay federal prevailing wage.

These rules, also known as Davis-Bacon, require contractors getting federal money to compensate construction workers at an hourly rate for pay and benefits that reflect what’s “prevailing” for each trade in the vicinity of the project.

Congress adopted Davis-Bacon in 1931, in part, to prevent contractors from bringing “cheap colored labor” and “low-paid colored mechanics” to federal projects around the country. The feds required contractors to match area wage and benefit levels, taking away the price advantage of businesses who didn’t hire workers from the white-dominated construction unions.

Today, construction unions defend prevailing wage because it neutralizes much of the disadvantage they face from more efficient non-union construction outfits, where most construction workers are employed (both in New York and nationally). Prevailing wage is especially crucial for unions with underfunded health and benefit funds, who charge what would otherwise be uncompetitive hourly rates to backfill them.

The White House, in announcing the CHIPS Act, abandoned any pretense about why prevailing wage is being required, writing the legislation would “support good-paying, union construction jobs by requiring Davis-Bacon prevailing wage rates for facilities built with CHIPS funding.”

The U.S. Labor Department determines prevailing wage by conducting periodic surveys of area employers, but in New York, the feds appear to moderately, if not heavily, consult New York’s own “prevailing wage” instead of survey results.

With respect to Albany, “prevailing wage” is a complete misnomer: for one thing, it doesn’t measure anything “prevailing” because the state doesn’t actually conduct a wage census. Instead, the state Labor Department deliberately miscalculates the prevailing wage by incorrectly assuming at least 30 percent of the workers in every trade in every part of the state belong to a trade unions. Then the Labor Department copies verbatim the terms of construction union contracts for each trade and region and declares them to be “prevailing.”

Federal data show the unions in many if not most cases have represented less than 30 percent of New York tradespeople in recent years (see below) but state officials have a strong incentive to fudge the numbers to maintain cozy relationships between governors and construction unions, who have become increasingly reliant on state government to steer work to them. 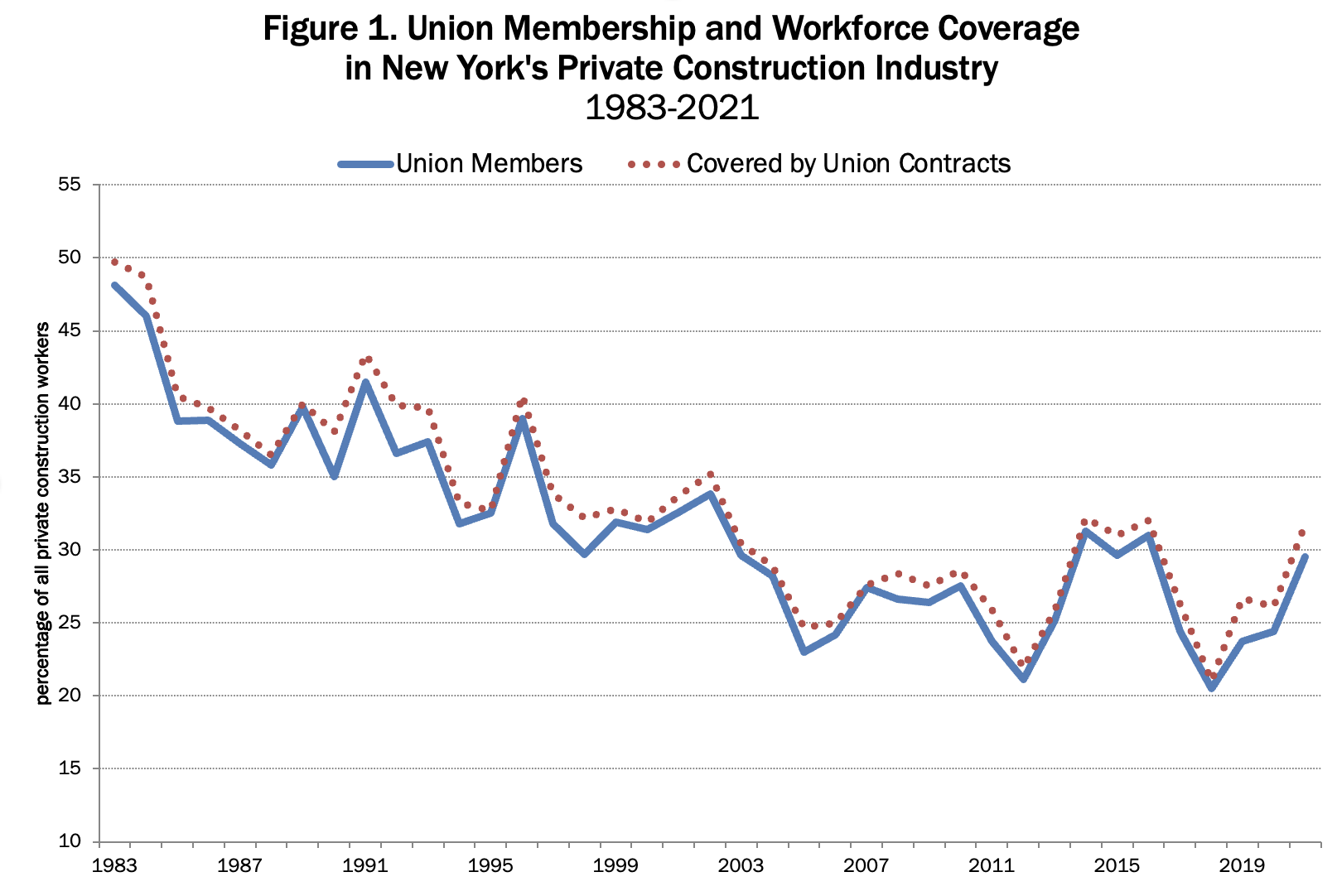 Beyond the cost premium Davis-Bacon would impose in most states, if the U.S. Labor Department in this instance is cribbing from Albany, the prevailing wage imposed on the Micron project will be higher than necessary even to comply with federal law. That means that plant construction costs will be far higher than they would be if Micron were to pay market rates for construction work.

For instance, if work were taking place today, builders in Onondaga County subject to New York’s prevailing wage would have to pay laborers at least $50.72 per hour and electricians must receive no less than $72.43 (the amount coincidentally used by the federal government for the area’s latest electrician wage determination). Prevailing wage generally rises each year, meaning these rates will likely be higher when the plant builder breaks ground.

That cost premium, of course, is being covered by generous public subsidies that will leave Micron free to focus on fitting more transistors on silicon wafers. The added cost of giving New York construction unions a reason to be grateful a month before an election will be the taxpayers’ problem.