The new total of almost 13,000 deaths amounts to 14 percent of New York’s pre-pandemic nursing home population, which is 2 points above the national average (see chart). 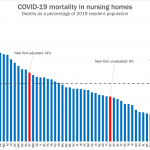 The Cuomo administration had used the smaller, partial death toll to argue that New York’s nursing homes were better protected than most.

That claim was revealed as misleading on Thursday, when Health Commissioner Howard Zucker issued a revised nursing home death count of 12,743, which was 50 percent higher than the state had previously acknowledged.

Six days after Zucker’s announcement, a state Supreme Court judge ordered the Health Department to promptly comply with a Freedom of Information request by the Empire Center, which sought nursing home mortality data maintained by the Health Department. Unless it appeals the ruling, the department is due to release the records within five business days.

Zucker’s revised count was a small preview of the fuller picture that data will provide. For the first time, it included some 4,000 nursing home residents who had died after being transferred to hospitals, a group the Health Department had excluded from its reporting—a practice used by no other state.

Zucker had resisted releasing that number for months, in spite of repeated requests from the media and members of the Legislature, as well as the Empire Center’s FOIL request. His change of heart came after a report from the office of Attorney General Letitia James faulted the Health Department for its incomplete reporting.

The department’s unusual methodology, though not a secret, made it impossible to properly compare New York’s nursing homes to those of other states. With the new, more complete total, it’s now clear that New York’s homes were hit harder than most.

In terms of the total nursing home deaths, New York is now at the top, with about 2,600 more than California.

New York’s standing also worsened by a benchmark frequently cited by the Cuomo administration—deaths in nursing homes as a share of all COVID-19 deaths. By this measure, the revised toll pushed New York from 21 percent to 33 percent, and its ranking among states from 48th to 33rd.

On this scale, New York remains below the national average of 36 percent—primarily because its overall death rate was unusually high.

The state’s revised total made national headlines, but it fell far short of what the Empire Center and others have been seeking.

Zucker provided a total nursing home death toll for only one day—Jan. 19—and the Health Department has not updated it since. The Empire Center’s FOIL lawsuit seeks the individual totals for each nursing home on each day since the pandemic began, numbers the Health Department has required the facilities to report through its Health Emergency Response Data System, or HERDS.

That additional data is necessary to properly analyze how the pandemic unfolded—including the impact of the Cuomo administration’s much-debate March 25 guidance memo compelling nursing homes to accept coronavirus-positive patients being discharged by hospitals.

In a July report, the Health Department used the precise timing of when daily deaths reached a peak to argue that the March 25 memo could not have had a significant effect. That analysis, like the Health Department’s public reports, excluded deaths that occurred in hospitals—one of many flaws in the report criticized by outside experts.

Although the public now has a total of residents who died in hospitals, that is not enough information to update and verify the Health Department’s analysis.

In addition to reporting 3,829 hospital deaths for the first time, Zucker’s tally also boosted the count of in-facility nursing home deaths. The in-facility tally he provided for Jan. 19 was 445 higher than the previously reported number for Jan. 18, an increase of 5 percent.

Zucker attributed these changes to an audit that had turned up “numerous inaccuracies” in the nursing home data.

It’s not clear that the state’s routine reporting—which still excludes hospital deaths—has been fully adjusted to reflect the audit.

On Jan. 28, the department reported a total of 8,940 in-facility coronavirus deaths. That was only 26 more than the in-facility number Zucker had provided for Jan. 19, even though nursing home residents have recently been dying at the rate of hundreds per week.