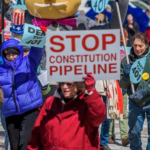 Yesterday’s fatal truck accident outside Binghamton is a reminder that state government’s opposition to natural gas pipelines is having negative consequences⁠—including putting more gas trucks on the road.

The truck, which overturned on I-88 in Fenton, appears to have been part of the “virtual pipeline” of vehicles carrying compressed natural gas from Pennsylvania to a compressor station in Herkimer County between Utica and Schenectady⁠—roughly the same route that would have been served by the proposed Constitution pipeline. As The Daily Star described the process in 2017:

The Cuomo administration blocked the Constitution pipeline in 2016 by denying state permits required under federal law. A series of court and administrative rulings earlier this year breathed new life into the project, which is awaiting other regulatory approvals.

Natural gas opponents, who succeeded in getting Cuomo to ban hydrofracking, have turned to blocking fossil fuel infrastructure, such as pipelines and compressor stations, albeit with mixed results. Natural gas is still reaching Albany and areas east by truck⁠—or, in at least one case, by Russian freighter—through an energy-intensive compression process. And absent adequate natural gas infrastructure, New England continues burning less efficient heating oil.

Meanwhile, a second “virtual pipeline” is popping up in Westchester County, where the local utility, Con Ed, is coping with a natural gas shortage. State regulators in February signed off on a mitigation plan that includes “using trucked supplies of compressed natural gas (CNG) and liquified natural gas (LNG).”