New York State’s enacted budget and New York City’s proposed budget for fiscal 2015 both project that welfare cash assistance caseloads will decline in the year ahead. Since the city accounts for nearly two-thirds of the state caseload, those trends are closely related.

However, based on testimony yesterday by Mayor Bill de Blasio’s top welfare official, both the state and city figures could need some adjustment—upwards. And if that happens, expenditures also will be higher than currently projected.

Steven Banks, commissioner of human resources, told the city City Council that HRA is easing restrictions on welfare recipients and applicants for other reforms of public assistance in several significant respects. For example, the agency will no longer make work a requirement for Food Stamp eligibility for unemployed able-bodied adults without dependents. More significantly, the city will implement a little-noticed fiscal 2015 state budget provision that allows welfare recipients to count four years of college as fulfilling their work requirements. That change was opposed by the Bloomberg administration.

As detailed in my Manhattan Institute Civic Report today, the city’s welfare caseload has dropped by 71 percent since the mid-1990s. After only a small increase during the recession, the number of welfare cash assistance recipients as of March had dropped slightly since de Blasio took office.

However, Banks in his testimony yesterday strongly hinted no one should be surprised if the number starts ticking up, at least temporarily.

Policy reforms to address inappropriate denials, case closings, and sanctions may lead to monthly caseload “growth” as a result of fewer interruptions or delays in eligibility among children and adults who previously would have been churned on and off the caseload during the year.

Over time such monthly “growth” can be addressed by more effective employment programs that lead to stable jobs.

Apparently, putting the word “growth” in quotation marks is meant to imply that, due to the change in policies, a higher number shouldn’t be too quickly compared to the statistics in the bad old Bloomberg days. But De Blasio’s first budget proposal also projects (on page 224) that the average monthly cash assistance caseload will decrease by 3.4 percent, or 12,157 people, during fiscal 2015. The fiscal year begins July 1 — which means Banks will need to deliver on some caseload shrinkage (or, perhaps, “shrinkage”?) quickly after delivering “more effective employment programs.”

Programmatic questions aside (e.g., does it really help the poor to make it easier to get welfare without working?), there is a dollar-and-cents issue here. Notwithstanding the projected decrease in the caseload, de Blasio’s budget also forecasts that public assistance spending will increase $49 million (3.5 percent) to $1.428 billion in fiscal 2015, then subside to $1.407 band $1.414 billion through fiscal 2018. These figures are about $30 million a year higher than the forecast in Mayor Bloomberg’s last budget.

Meanwhile, as shown in the chart below, Governor Cuomo’s latest long-term financial plan assumes that the statewide welfare rolls will shrink by about 50,000 people (or nearly 9 percent) over the next four years. New York City’s proportionate share of that number would come to 31,000 fewer cash assistance recipients. 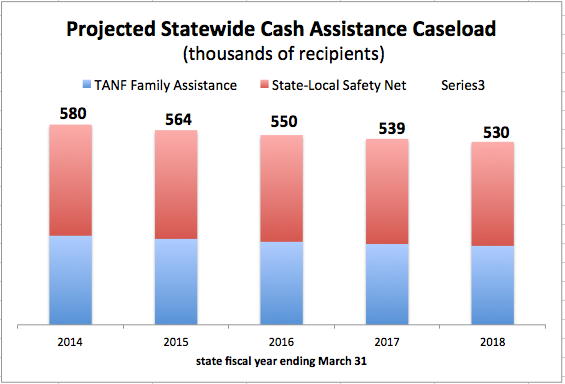 It will be interesting to see whether Mayor de Blasio and Commissioner Banks can “more effectively” put people to work and thus reduce overall welfare dependency even while pursuing policy changes that make it easier to get and stay on the welfare rolls.

Getting Food Stamps is a SNAP