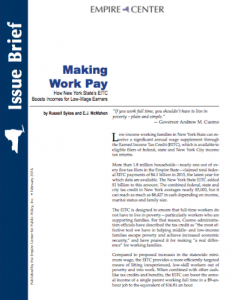 Here’s another reason to celebrate New York’s Earned Income Tax Credit: It measurably improves the health and longevity of those who receive it.

A new study from Columbia University’s Mailman School of Public Health estimates that EITC recipients in states that supplement the federal credit gain an average of 2.2 years of healthy life compared to their counterparts in states without a supplement.

The study, published in the September 7 edition of the American Journal of Preventive Medicine, further finds that the EITC is cost-effective, putting the states’ investment at $7,686 per life-year.

“This study suggests that relatively small investments in EITC might not only reduce poverty but also improve health and longevity,” the authors wrote. “It may also carry the additional benefit of reversing declines in life expectancy among low-income Americans.”

Enacted in 1975, the federal EITC is a tax credit designed to boost the earning power of low-income working families. This year, it’s worth as much as $6,269 for a qualifying parent with three children.

Twenty-five states and the District of Columbia have supplemented the national program with credits of their own. New York State’s EITC, which dates back to 1994, adds 30 percent to the federal credit. New York City adopted its own smaller EITC in 2004. Taken together, the three credits combined can be worth as much as $8,427.

Almost one-fifth of tax filers across the state claimed the EITC in 2015, collecting $4.1 billion in federal credits and $1 billion in state credits.

An Empire Center report in February showed that existing EITCs, when combined with other credits and benefits, can boost the income of a single parent working full-time from $9 an hour to the equivalent of $16.81.

The report further showed that the EITC is a more cost-effective tool for lifting New Yorkers out of poverty than a minimum wage hike–because it targets money to those who need it most without placing a job-destroying burden on business.

The authors of the  Columbia study point to another upside of the EITC. They note the program’s health effects are much stronger than those of traditional welfare programs, such as Temporary Assistance to Needy Families, which has actually been associated with higher mortality. One explanation, they suggest, is that EITC doesn’t merely increase income, but also gives recipients an incentive to be employed, which in itself is correlated with better health.

Supplemental EITC appears to solve many of the concerns of traditional welfare programs in that it (1) does not trade one upstream determinant (employment) for another (income) and (2) increases employment and earnings indefinitely without placing new restrictions on recipients.

Not his father’s wage subsidy?