The trend is the opposite of projections in Governor Cuomo’s state financial plan, as illustrated below. The governor assumes the number of welfare recipients statewide will decline steadily over the next four years. 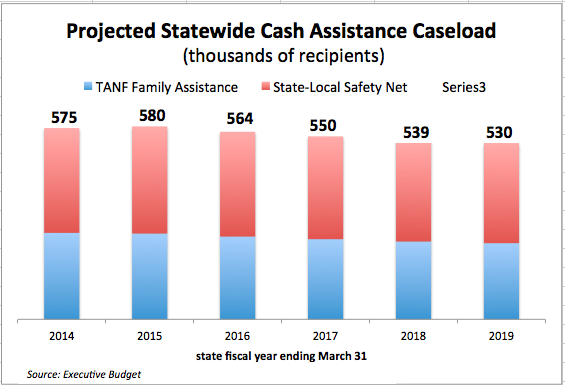 To be sure, the state budget numbers are, as usual, slightly inflated: for example, average total welfare recipients through the first nine months of fiscal 2015 were 566,000, about 14,000 less than projected in the budget, according to data from the state Office of Temporary and Disability Assistance.

The city trend, wherever it leads, is likely to dominate the direction of welfare dependent and its impact on the state budget in the future. As noted here last year, a bigger caseload will mean higher expenditures.

After an enormous drop between 1996 and 2012, the number of welfare recipients remains very low by historical standards, Eide said. In addition, the number of city residents receiving federally funded Supplemental Nutritional Assistance (i.e., Food Stamp) benefits has declined in the past year.