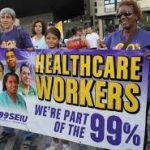 The Cuomo administration’s analysis of its own Medicaid rate hikes, shared in draft form with industry officials last fall, appeared to show a disproportionate benefit for hospitals associated with the politically influential labor union 1199SEIU.

The analysis, in the form of a 20-page spreadsheet and a four-page summary, detailed the distribution of almost $1 billion in added state funding to 176 hospitals over three years.

The 48 hospitals it identifies as having 1199 contracts, which have accounted for just over half of admissions in recent years, were projected to receive a net increase of $590 million, compared to $374 million for all other hospitals.

The spreadsheet, which was prepared shortly before the Health Department announced the rate hike on Oct. 31 of last year, does not necessarily represent the final plan as implemented. Still, it provides black-and-white documentation that officials drafting the plan were keenly focused on the benefits for 1199 and its lobbying ally, the Greater New York Hospital Association – and at least considered a design that funded their affiliates more generously than others.

Both groups were major supporters of Governor Cuomo’s re-election campaign last year. In the spring, 1199’s Healthcare Education Project spent $3.5 million on an advertisement campaign praising the governor’s health-care budget. Over the summer, as the campaign heated up, GNYHA contributed $1 million to the state Democratic Party.

However, state officials described their Medicaid rate change as providing “across the board” increases of 2 percent for hospitals and 1.5 percent for nursing home, and emphasized that they would apply to union and non-union facilities alike.

First, it showed the interlocking effects of three different changes to Medicaid reimbursement for hospitals – the 2-percent increase in rates for inpatient care, a “rebasing” of the overall rate structure, and the distribution of $230 million in “enhanced safety net” funding for fiscally distressed institutions.

Rebasing refers to the periodic updating of Medicaid rates to reflect changes in the relative cost of different procedures over time. Although the parameters were not spelled out, this change caused some hospitals to gain money and others to lose. The results, on net, skewed heavily toward institutions with 1199 contracts, which are concentrated in the New York City area.

They were projected to collectively receive a net benefit from rebasing of $256 million over three years, compared to a $1 million net loss for the group categorized as “rest of state.”

The impact of the “across-the-board” rate hike was also uneven, possibly because it built on top of the rebasing. The result was an increase of $265 million for 1199 hospitals, and $214 million for everyone else.

The combined effect is a net increase of $590 million for 1199 hospitals, compared to $374 million for the others – a 58 percent difference, even though both groups handle roughly the same share of patients.

Beyond divvying up the money, the spreadsheet also gave a detailed estimate of the three-year “contract costs” for each 1199 hospital – and measured how the rate changes would offset those costs. This apparently referred to the agreement between 1199 and the League of Voluntary Hospitals and Homes of New York, which was signed the previous July and took effect on Oct. 1, 2018. The spreadsheet does not include any estimate of labor costs for other hospitals, including those which have contracts with other unions.

It’s not clear what parts of this plan, if any, were actually put into effect. Letters to hospital administrators and health plans describe a 2-percent increase in Medicaid rates but make no mention of rebasing or the distribution of safety net funds.

The rate hikes were ordered at a time when Medicaid spending was running well over budget, leading officials to briefly postpone $1.7 billion in payments that were due in March and opening a deficit of $3 billion or more in the 2019-20 budget.

The hikes were meant to be financed with proceeds from $2 billion in proceeds from the sale of the Catholic-affiliated Fidelis Care health plan, but that arrangement is now under review by federal officials.

The governor’s budget director, Robert Mujica, acknowledged in to the New York Times that the administration had conceived the Medicaid rate hike in response to the lobbying efforts of 1199 and GNHYA, who were among the governor’s most important political allies.

The members of those groups clearly received special attention from the governor’s aides as the rate changes were prepared. It would be worth knowing whether they received extra state money as well.