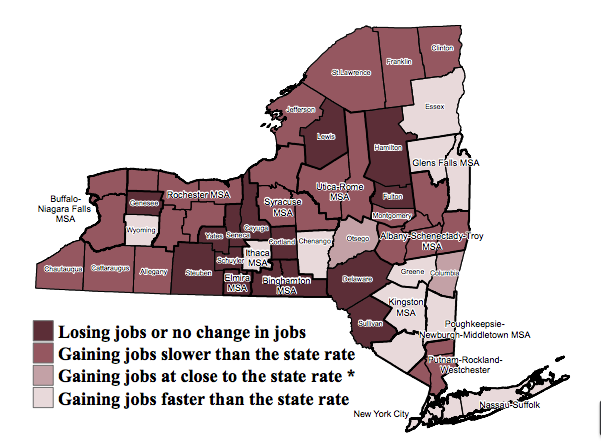 The latest economic data for New York continues to relate a tale of two states. Private sector employment growth in New York as a whole slightly trailed the national average on a year-to-year basis, but was much stronger in the New York City metropolitan area. The 52-county upstate region grew at just half the national rate from April 2012 to April 2013, according totoday’s monthly jobs release from the state Labor Department.

The state added 137,000 jobs, a gain of 1.9 percent during a period when the nation was growing 2 percent. Fifty-seven percent of the net new private jobs were created in New York City, which grew at a rate of 2.5 percent. The strongest job growth (2.9 percent) was in Nassau-Suffolk–which may, in part, reflect ongoing reconstruction and recovery from Superstorm Sandy. The fastest-growing private-sector job category (up  43,100) was educational and health services, which also heavily dependent on federal, state and local government subsidies. The next fastest-growing, business and professional services, has been strongest in New York City in recent years.

Continuing a now-familiar trend, the unemployment rate–measured in a separate household survey–is higher in New York City (8.4 percent) than in the rest of the state (7.4 percent), and the state as a whole had unemployment of 7.8 percent, a four-year low, but still slightly above 7.5 percent for the U.S. as a whole.  Outside the Bronx and Brooklyn, double-digit unemployment was concentrated in upstate rural areas, as shown in this breakdown from the Labor Department.