The New York State Assembly this evening followed the Senate’ lead in passing a teacher pension bonding option that would undermine a property tax cap while generating more risk for taxpayers — but a leading State Capitol reporter has tweeted that Governor Cuomo’s “quick comment” on the bill suggests “strong opposition.”  Cuomo certainly should be opposed.

As for the cap itself, the omnibus bill containing it (no download link yet) finally appeared within the last hour.  At first glance, it looks identical to the version Speaker Silver introduced last month, with a modified expiration date.

Specifically, the cap “shall remain in full force and effect at a minimum until and including June 15, 2016 and shall remain in effect thereafter only so long as” the state’s temporary rent control statutes — which expire a year earlier, but which can be expected to be renewed (in modified form) for many years to come.

Here’s the passage in question: 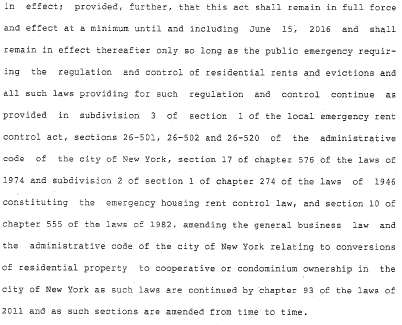