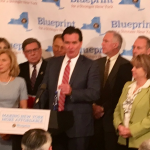 The headline items from what the Senate is also terming its “affordability agenda” are two familiar and solid positives:

The Senate rhetoric in support of the plan was summed up in a press release quote from Majority Leader John Flanagan:

Whether you are a New Yorker looking to begin a career, a young family working hard to make ends meet, or an older New Yorker looking to stay in your community, our state’s high cost of living is forcing thousands of New Yorkers to flee to other parts of the country. The Senate Majority is taking action to stop this outmigration and make our state more affordable by delivering $4.2 billion in middle class income tax cuts this year, proposing hundreds of millions of dollars in new tax relief, and ensuring long-term fiscal responsibility in government.

In reality, the Senate is not “delivering $4.2 billion in tax relief this year.” That number matches the projected tax savings for New York households by the time the middle-class PIT cut is fully phased in over eight years, by 2025. That time frame might sound drawn out, but under the circumstances at the time of tax cut’s adoption in 2016, it was realistic and fiscally responsible.

The other “new tax relief” in the Senate Republican plan includes some added breaks on energy taxes and also would raise the tax exemption on pension income, as well as continuing state PIT itemized deductions that would otherwise be automatically repealed by the new federal tax law.

Unfortunately, the Senate Conference has also embraced what may rank as one of the most irresponsible and inequitable property tax proposals ever pushed by a legislative majority in Albany: Sen. Kenneth LaValle’s bill freezing school property tax rates for senior citizens.

It’s not as if the state is not already doing extra for seniors. First, of course, there’s the tax cap itself, which has effectively limited the total local government and school levy for all property owners, while also strengthening the ability of school district voters to impose a hard tax freeze on their districts by denying a majority vote to proposed budgets.  In addition to this,  the state also finances a special “Enhanced” School Tax Relief (STAR) homestead exemption to all homeowners over 65 with household incomes up to the generous level of $86,000.

Under LaValle’s bill, a hardy perennial dating back to 2005, homeowners over 70 would qualify for a the tax rate freeze if  they otherwise meet the generous Enhanced STAR guideline. The justification, from the bill sponsors’ memorandum:

By the time New Yorkers attain the age of seventy, they typically no longer have dependents in the New York State school system … By providing a fixed school tax rate to persons aged seventy or older, this bill ensures some tax relief to persons no longer reaping the benefits that the real property school tax provides.

Which, of course, only begs more questions. After all, if school taxes should be paid only by people who “reap the benefits” of schools, why doesn’t LaValle propose freezing tax rates for all single and childless homeowners? While he’s at it, why not also freeze the taxes of families with children who attend private schools?

Under “Fiscal Implications for State and Local Governments,” LaValle’s memo says “None to the State,” which is another way of saying the cost will simply be borne by all other property owners in a given district. On the other hand, the bill itself contains a provision implying that school districts affected by the freeze could seek reimbursement from the state. In that case, the cost could potentially be enormous.

But wait—there’s more, and it’s much worse. From the Senate release:

In addition, the Senate will go one step further and propose completely eliminating school property taxes for seniors over the next ten years. [emphasis in original]

Viewed in the kindest light, the complete elimination of school property taxes for the elderly might be viewed as a perverse way of stemming the out-migration tide by bribing younger homeowners to hang around in New York until they’re old enough to pay nothing. Or bribing seniors to come back to New York. Either way, it’s unfair to everyone else—and it’s by no means fair to assume that couples with incomes as high as $86,000 a year, many living in fully paid-off houses, are uniformly unable to afford their property taxes.

Speaking of everyone else, the Senate is proposing a 25 percent increase in the state’s existing “property tax relief credit,” a temporary gimmick invented at Senate Republicans’ insistence back in 2015. A far better approach would be to simply cancel the credit and use the savings to accelerate the scheduled (and permanent) middle-class PIT cuts, so they can deliver bigger savings sooner, to largely the same people. While a permanent PIT cut is undoubtedly superior from an economic and fiscal standpoint, the Senate is clearly convinced that a check in the mailbox will get lawmakers more credit.

In the Senate’s Albany bubble, the obvious and simplistic pandering reflected by the property tax relief program is viewed as smart politics. As policy, it’s bankrupt. A rate cap and tax phase-out for seniors, along with the existing property relief cap, would merely shift rather than reduce cost burdens.

The New York affordability problem touted by Flanagan and his colleagues today exists because the state and local governments spend so much. That spending problem, in turn, is driven primarily by the exceptionally high public employee compensation and staffing levels, especially among public school teachers and police departments. Other factors include state laws mandating union compensation and staffing levels on all public work projects.

A legislative agenda that (like this one) actually addresses these issues would, at last, represent a true “blueprint for progress.” Maybe the Senate GOP will ultimately get around to producing one.