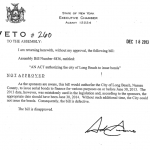 The bill in question allows the Long Island city of Long Beach to borrow up to $12 million to deal with its budget deficits — no strings attached.

Legislation allowing the city to borrow was vetoed late last year by Cuomo, who didn’t express any reservations about borrowing, but noted that the deadline for issuing bonds had come and gone. The state Legislature saw this problem coming, though,reintroduced the borrowing bill with a  new deadline and no strings attached.

Cuomo already has given a rubber stamp to $96 million of deficit bonding for Rockland County and on this second time around, without any technical errors to hide behind, he broke out the rubber stamp for Long Beach. The governor’s approval message is not yet available, so we don’t know his reasoning for going along with this plan.

The Rockland and Long Beach bills break with the state’s tradition of requiring distressed municipalities to submit to oversight by a control board. And they create a bad precedent for the future

It’s also important to note that the push for allowing Long Beach to issue bonds is highly misleading. The proposal is billed in the bill memorandum as a response to Superstorm Sandy, but months before the storm hit the city was facing a $12 million deficit.

In fact, during the summer of 2012, the state Legislature was already considering $15 million in borrowing for Long Beach. Deficit problems for the city have been blamed on poor budgeting practices.

By approving Long Beach’s borrowing scheme, Cuomo and the state Legislature have signaled to irresponsible municipalities that they’re open for business when it comes to similar situations.