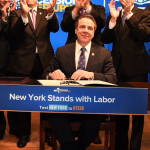 When Governor Andrew Cuomo recently signed a bill making it harder for government workers to extricate themselves from labor unions, he said it was just “the first step of the resistance.”

Translation: it wasn’t the last favor Cuomo hopes to do for New York’s powerful public-sector labor unions in anticipation of the coming U.S. Supreme Court decision in Janus v. AFSCME, which could void state laws compelling government workers to pay dues-like agency fees to unions they choose not to join.

So, what will New York’s governor and lawmakers seek to do next for their union friends?

The answer quite possibly could involve, for the first time, direct taxpayer subsidies to backfill potential revenue losses.

At stake for New York in the Janus case are at least $862 million in annual revenues the unions now rake in from state and local government workers who, under current law, know they will be forced to pay even if they opt-out of membership.

In an attempt to minimize the impact of a Janus ruling favoring worker rights, a provision tucked away at the last minute in the recently enacted New York State budget will:

The budget bill provision was arguably Albany’s most generous giveaway to government unions since 1982, when the Legislature enacted the Triborough Amendment perpetuating automatic pay raises after contracts expire.

Political allies of government unions, such as New York City Mayor Bill de Blasio, argue that “labor stability” relies on providing resources to the government unions in the form of compulsory agency fees from non-members.

If the Supreme Court outlaws compulsory agency fee payments, the governor and legislators will use the same rationale to justify subsidies of unions’ “representational” functions.

Consider, for example, what Hawaii state lawmakers proposed in 2016, when the Supreme Court seemed poised to end agency fees as part of its ruling in Friedrichs v. California Teachers Association (a case that ended in a draw after the sudden death of Justice Antonin Scalia).

When Friedrichs was still pending, senators in the Aloha State wanted to steer public money into a “public employees’ collective bargaining fund.” Their rationale? An end to fees would “fundamentally undermine this legislature’s consistent efforts to ensure labor management peace.”

In reality, there is no evidence that agency fees contribute to “labor peace.” In fact, the already high number of public-sector strikes in New York actually rose for several years after compulsory agency fees were authorized in 1977; strikes only dropped off in the early 1980s, in New York and across the country, after President Ronald Reagan’s high-profile firing of striking air traffic controllers.

Not just a bigger bill

Subsidizing even a fraction of $862 million in union revenues wouldn’t just be expensive: it would also create new potential for corruption and misuse of public funds. After all, government unions have been caught miscategorizing their expenses in a bid to conceal their political activity, and must disclose very little about how they spend the funds workers are forced to pay them. Nothing would stop the unions from routing public money into the same political uses.

Another union bailout option could be an indirect subsidy, via the state personal income tax (PIT) code. For example, a bill (S7556/A9795) introduced earlier this year by Senator Martin Golden (R-Brooklyn) and Assemblyman Peter Abbate (D-Brooklyn) would provide tax credits based on union dues paid by both public- and private-sector union members.

The sponsors’ memo filed by Golden and Abbate says the bill “helps the public employee unions by providing an opportunity for the unions to convince agency shop fee members that full membership has many benefits, all of which they can explore for free due to the tax credit.”

But that “for free” claim is inaccurate: the bill would calibrate the credit to be equal in value to an itemized deduction created at Cuomo’s behest in last year’s budget. For workers who itemized—i.e., mainly the best-paid—the credit equates to a savings of no more than $67 for every $1,000 in dues. (The value of the deduction was also misrepresented by one of the state’s largest unions, the Public Employees Federation, which informed its members last December that  “union membership will be essentially free” as a result of the governor’s move.)

The cost of the deduction for state taxpayers was $35 million, but the sponsors’ memo for the Golden-Abbate bill says the credit’s price tag remains “to be determined.”

When unions provide workers with real value for dues dollars, they won’t have trouble attracting and retaining members.

When they don’t, it shouldn’t be up to taxpayers to make up the difference—propping up organizations whose fundamental goal is to squeeze more money for members out of public budgets.

Beyond the dollars-and-cents impact, the line between unions’ representational duties and their political and lobbying expenses frequently has been blurry, at best. Any New York State legislation directly funding unions would be tantamount to providing taxpayer subsidies to a political party. And that would be unprecedented … Oh, wait.