An unusual clause in Governor Cuomo’s Medicaid budget would trigger $2.5 billion in across-the-board cuts if the Legislature doesn’t otherwise agree to a package of savings.

The ultimatum, shown in full below, is sprinkled throughout Medicaid portions of the proposed Aid to Localities appropriations bill (eg., on pages 504-5, 514, 535, 541 and 564). It appears to be Cuomo’s plan B for closing a massive deficit in the health plan for the low-income and disabled.

Plan A, highlighted in his budget speech on Tuesday, calls for reviving his Medicaid Redesign Team of health-care industry experts and stakeholders and tasking them with identifying that same $2.5 billion in savings.

In the event that panel cannot agree on a cost-cutting plan–or if the Legislature balks at approving it–the provision mandating across-the-board cuts would give Cuomo a fallback option.

The maneuver pushes the limits of the governor’s constitutional authority in budget-making. The clause is included in an appropriations bill, in which the Legislature can amend only the dollar amounts to be spent, not the accompanying language.

This leaves the Assembly and Senate limited options for blocking the cuts. They could severely reduce or zero out the Medicaid program, in hopes of forcing Cuomo to compromise. Or they could argue the clause was unconstitutional, strike it from the bill before voting, and invite a court battle with the governor.

Given the high stakes, the details are remarkably vague–hinting that the provision was added to the governor’s proposal at the last minute.

It says the cuts would be triggered “if, on or before April 1, 2020, the Legislature fails to achieve $2.5 billion in aggregate savings” from Medicaid. But it doesn’t specify what “achieve” would mean or who would judge whether that condition had been met.

Assuming the savings are not found, it says “uniform, across-the-board reductions shall be applied to such appropriations,” but does not define the terms “uniform” or “across-the-board” nor identify who would do the applying.

The provision also appears redundant. Under the Medicaid program’s “global cap” law–which Cuomo pushed through early in his first term–the Health Department already has broad authority to cut Medicaid spending as necessary to stay under its budgeted target.

Also unclear is Cuomo’s plan for the Medicaid Redesign Team. He’s counting on that panel to fill a $2.5 billion hole in his spending plan that’s due by April 1. As of Thursday, however, he had named only its co-chairmen–Northwell Health CEO Michael Dowling and former union leader Dennis Rivera–and had not scheduled its first meeting or set a deadline for its report.

The timing is tight. The Constitution gives Cuomo 30 days to revise his budget bills, after which point he would need the Legislature’s consent to submit additional legislation.

His original Medicaid Redesign Team was appointed by executive order on Jan. 5, 2011, in one of Cuomo’s first official acts after taking office. That order required the group to report back by March 1–which was early enough that he could incorporate its recommendations into his 30-day amendments.

In his budget address, Cuomo said the revived panel would be tasked with finding savings that have “zero impact” on Medicaid’s beneficiaries: “Find industry efficiencies and or additional industry revenue, root out waste, fraud and abuse and get this done in time for the April 1 budget, which is just what we did with MRT 1, and it worked.”

He also said the panel’s recommendations must have “zero impact” on local governments–but he effectively contradicted that promise moments later.

New York City and the 57 counties currently pay about $7.6 billion of Medicaid’s $74 billion budget, the largest local contribution of any state. Cuomo is now proposing to cap the growth of the state’s share at 3 percent a year and require counties to pick up any increases beyond that. City officials said such a change could cost them hundreds of millions of dollars.

Medicaid spending has been running billions over budget in recent years–due to spiraling costs for long-term care, an increased minimum wage and rate hikes for hospitals and nursing homes. The Cuomo administration hid the overages for several years by pushing costs from one fiscal year to the next, a tactic that caused the problem to snowball. 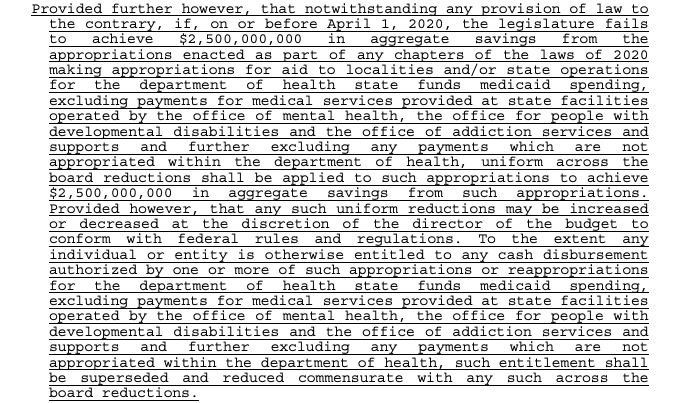