As shown below, the highest-earning 1 percent of taxpayers (those with incomes above $750,000 or so as of 2007) accounted for nearly 40 percent of New York’s total state income tax liability last year — up from around 27 percent in the mid-1990s.   Notice how the bar for the top 1 percent shrunk rather significantly in both 2001 and 2002?    That trend will probably repeated in 2008 and 2009.  The difference, this time, is that the rebound is unlikely to be nearly as strong or as quick, because the supercharged Wall Street compensation model of the last few years is one of those things that has melted away with the financial crisis.    Which is why Governor Paterson has good reason to sound the alarm about the state’s budget outlook. 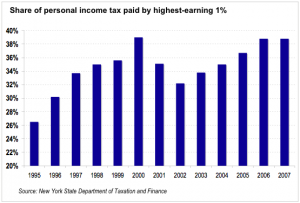