The just-released official 2010 Census data for New York State indicate New York City is growing more slowly and Buffalo is shrinking even faster than had been suggested by previous estimates. 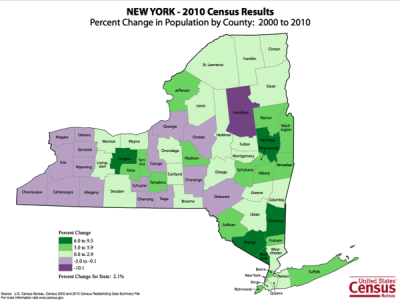 UPDATE: In general, the numbers can be seen as a pleasant surprise for upstaters. The July 2010 estimates showed 35 upstate counties losing population, but the official data show just 17 losers.  And there are some interesting patterns within those numbers.  For example, despite Buffalo’s larger-than-expected population loss, Erie County’s population decrease during the decade was just 3.3 percent.  In fact, excluding Buffalo, the rest of the county basically held its own. The same was true of neighboring Niagara County, in which Niagara Falls lost more people than the estimates would have indicated, while the rest of the county gained population.

The 2010 Census map should also come as a pleasant surprise to legislative Republicans.  The state gained a net 401,645 residents, of which 166,855 is attributed to New York City.  In other words, the city has added the equivalent of a bit more than an Assembly seat.  Otherwise, the balance of power has moved from cities to suburbs, west to east, upstate to down, but more moderately than had been expected.