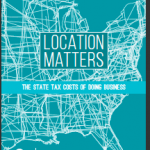 New York’s tax climate for key business sectors—with the notable exception of manufacturing—ranks at or near the bottom among 50 states, according to a new study by the Tax Foundation and the KPMG accounting firm.

The study, “Location Matters,” differs from the Tax Foundation’s better-known annual  “State Business Tax Climate Index” in that it focuses more tightly on effective tax rates: i.e., what different types of firms actually pay to state and local governments as a share of income after factoring in tax credits and incentives.

The summary rankings from the study are below.

New York’s relative light tax burden on manufacturers—especially capital-intensive manufacturers, who can claim the state’s generous investment credits—was pointed out in a previous version of the same study a few years ago. Last year’s phase-out of state corporate taxes on manufacturers won’t do too much to change this, since the effective rate on such firms was only 1 percent before the new policy was adopted, the Tax Foundation and KPMG estimate.

On the other extreme, New York imposes an exceptionally stiff tax burden on corporate headquarters and R&D headquarters—except, in the latter case, newer firms qualifying for Excelsior Tax Credits.

Of course, that’s the same effect created by another program unmentioned in the study—START-UP NY, which zeroes out taxes for firms new to New York if located in zones on or near college campuses.

Important caveat: the study modeled two cities for different types of sectors. For corporate headquarters, R&D headquarters and retail, the location was assumed to be New York City, which adds its own higher business income tax to the state corporate income tax, pushing the effective rate into double digits.  For other sectors, the firm location was assumed to be Utica.