New York’s infrastructure is shot, and money is short.  Nonetheless, the state Department of Transportation (DOT) is pursuing a contracting strategy that tends to increase highway and bridge construction costs, by linking bid awards to project-labor agreements (PLAs). 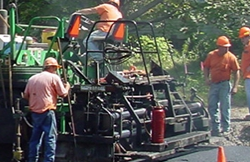 PLAs steer contracts to unionized firms, imposing terms and work rules favored by unions on public works projects. New York’s pro-PLA policy dates back to an executive order signed by Governor Pataki in 1997. Its use was further expanded under Governors Spitzer and Paterson, a policy that apparently is continuing under the Cuomo administration. While union advocates say PLAs improve quality and reduce expenses, a study by the Beacon Hill Institute found that such agreements added 20 percent to school construction costs in New York.

In its efforts to steer at least one recent highway contract to union firms, the DOT may have wasted $4.5 million and crossed the line into breaking other procurement laws, the non-union Empire State Associated Building Contractors (ABC) charged today.  The group’s allegation involves the process followed by DOT in awarding a contract for reconstruction of breaking the reconstruction of Exit 122 Interstate 86 in Orange County.

The low-bidder for the project was Lancaster Development, a “merit shop” (i.e., non-union firm) based in Schoharie County.  The contractor group claims DOT added the pro-union requirement for Exit 122 four weeks after advertising for bids, and just two weeks before the March 24 opening of bids on the project.  Moreover, it alleges the agency unlawfully negotiated terms of the agreement with a lobbyist for the Hudson Valley Building Trades Council during the “restricted period” between the bid advertisement and bid award.

Because Lancaster Development refused to sign the PLA, its low bid for the Exit 122 work was rejected in favor of the second lowest bid, which was $4.5 million higher, the ABC said — even though Lancaster also exceeded the project’s goal for “disadvantaged business involvement.”

Lawful or not, the Exit 122 case points up striking inconsistencies in New York’s capital procurement policy, which seems designed mainly to steer work to the “right” bidders (in political terms) rather than ensuring taxpayers get the best possible result.