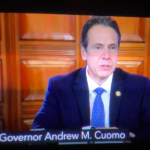 For the third time in three years, health-care interests are airing TV ads favorable to Governor Cuomo in the thick of high-stakes negotiations over Medicaid funding.

The 30-second spot, embedded below, is sponsored by the Healthcare Education Project, which jointly represents the health-care labor union 1199 SEIU and the Greater New York Hospital Association, two of Albany’s most influential lobbying organizations.

“First Trump tried to cut $5 billion,” the voiceover says. “Then he tried to gut coverage for pre-existing conditions. Now Trump wants billions more in health care cuts just when we need it most.”

The spot then cuts to a segment from a recent press conference by Cuomo: “There has to be a place where you don’t play politics,” the governor says. “It has to end somewhere. And it should end at health care.”

The 30-second spot ends by asking viewers to “tell Trump to defend our care.”

The ad focuses on various attempts by the Trump administration to reduce funding for Medicaid or overturn the Affordable Care Act, which are mostly going nowhere in Congress or awaiting action in the courts.

It makes no mention of the most immediate concern for New York’s health-care industry, which is a $2.5 billion imbalance in the Medicaid budget primarily caused by the state’s own policies. Seeking to put the brakes on the program’s rapid spending growth, Cuomo has proposed to close the gap by reducing next year’s state Medicaid spending by $2.5 billion, or about 10 percent.

Previous governors who sought to rein in Medicaid costs often faced attack ads from the Healthcare Education Project. The group has taken a different tack with Cuomo.

It has sometimes pushed back against his proposals, but to date has avoided criticizing him by name. Instead, it portrays Trump and Republicans in Congress as the major threat to New York’s health-care funding, and Cuomo as the state’s chief defender.

The strategy seems to have worked. In early 2018, the group launched an ad campaign boosting a proposal from Cuomo to create a health care “shortfall” fund as a hedge against potential cuts by Washington. Those cuts did not materialize. Cuomo later used the resulting pool of money – which was renamed the Health Care Transformation Fund – to finance Medicaid rate hikes for hospitals and nursing homes, giving special attention to institutions that employ 1199 members.

In late March 2019, the Healthcare Education Project again lauded Cuomo for protecting New York from threats by Trump – even though the president’s proposals had no chance of passing after Democrats took over the House of Representatives.

At the time, unbeknownst to the public, Medicaid spending was running $1.7 billion over budget, a deficit that had not been revealed to the public. Yet Cuomo dropped a set of cost-cutting measures and resorted to delaying a month’s worth of Medicaid payments from one fiscal year to another, spawning the deficit that he and the Legislature are now faced with closing.

The group sponsoring the ads got a boost from a July 2018 contract settlement between 1199 and the League of Voluntary Hospitals, whose membership overlaps with that of GNYHA. That deal authorized transferring up to $145 million in “surplus” funds from the union’s benefit fund to other union purposes, including the Healthcare Education Project.

That contract, in turn, was subsidized with state funds – in the form of the Medicaid rate hike ordered by Cuomo later the same year.

In effect, Cuomo used Medicaid dollars to subsidize a labor contract that financed a lobbying group that’s now paying for ads praising Cuomo – and seeking more Medicaid dollars in the future. It remains to be seen if the strategy works as well this time around.

For the third time in three years, health-care interests are airing TV ads favorable to Governor Cuomo in the thick of high-stakes negoti...